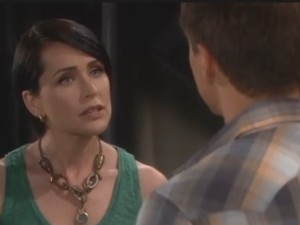 “B&B” continues to bring big drama and variety; so much going on to keep us entertained! The Liam/Hope re-do was probably the least intriguing story – it’s just silly at this point. Thoughts:

Too into the fantasy.
Carter’s behavior is very creepy. The way he’s hitting on Maya when they’re supposed to be acting is just so uncomfortable to watch. Caroline’s once again been over-the-top, so she’s borderline annoying. Here’s hoping that after this scheme blows up in her face, she’ll move on from the Rick obsession at least for a while. She can still be fun and be stronger.

Already approved.
Well, it was a treat to see some strong women having their way with a man in the business world. Nice! Talk about kicking Bill where it hurts… It will be interesting to see if Katie moves forward as things stand or if she’ll start wanting her marriage back. Here’s hoping she sticks to her guns!

Flip-flopper extraordinaire.
Liam may just have set a new record in soap opera flip-flopping by passionately kissing Steffy farewell in Paris after asking her to come back with him and a day later declaring to Hope that it was always her and proposing! Yuck and double-yuck. No credibility left whatsoever.

Not a member of the Hope Logan Fan Club.
Quinn sure didn't like Hope sniffing around her son or that necklace! It's fun to have a character that doesn't go the expected route. Besides, she's probably right about Hope being trouble for Wyatt. As long as Liam's around he'll be at risk for getting messed around.

You should be ashamed of yourself!
Wow! What an exchange between Brooke and Katie on Friday - no holds barred soapy satisfaction! What unbelievable nerve Brooke had bursting in there and saying those things to Katie after what she did. Mere days ago Brooke was a quivering mess worrying about whether Katie would be alright. Seems she's just fine! The icing on the proverbial cake was Katie letting loose and hollering that Stephanie was right all along - Brooke's just a slut from the valley! Viewers everywhere gasped...and then came the slap. Ah, so so good.

That necklace.
You have to give it to Hope for coming out and saying that she thinks Wyatt might be Liam's half-brother. Quinn didn't seem to be lying, however, when she denied Bill was his father on Friday's episode. That leads me to the conclusion that she's telling the truth about his father having died, and that his father was Bill's father, which makes him Bill's half-brother and Liam's uncle. Just a guess! Who do you think is Wyatt's father? Vote:

Find out when Parks And Recreation returns.