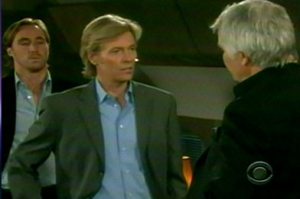 When polled, most of you (105 out of 224) thought it was a great twist that Rick was the one to steal Forrester designs and give them to Jackie M. I totally agree, but I’m not sure he would have done that to his father. However, I already stated that in last week’s blog, so, moving on.

Rick being the culprit is definitely affecting the whole canvas and ramping up the fantastic feud between him and Stephanie. While I think Stephanie needs to chill out a bit, Susan Flannery’s (Stephanie) scenes with Kyle Lowder (Rick) are wonderful. They can be humorous, yet emotionally charged and it’s a great way to carry on Stephanie’s hatred of the Logans, while not having her go head to head with Brooke for the millionth time. (To read Kyle Lowder’s thoughts on Rick and Stephanie, read our interview here and part two on our sister site Soap Opera Fan Blog.)

Now that Stephanie has seen Rick and Steffy kissing with her own eyes and heard Rick admit he stole the designs, Rick better watch out! And probably Steffy too for that matter.

Even though Stephanie hates Rick for what he’s done, Eric has decided to protect his son by keeping the truth to himself. Some people may not agree with him, but I understand the motivation. Rick is his child and he recognizes how tortured he is right now, so it’s understandable that he wants to help him. It’s also a great way for the show to acknowledge the way Rick was raised. Soap characters are not great parents, so it’s refreshing when shows admit that and use it to explain how children turn out as adults. It kind of makes sense in a twisted soap opera type of logic.

My only real complaint about Rick being the person to sell out his family’s company is that I was enjoying Rick’s new take-charge behavior. He was no longer the whiny boy looking for his parent’s approval. He was going after the things he wanted, like Steffy and a fresh start at Jackie M, but now it’s like he’s sitting in the corner after being punished. When Eric and Nick discussed the terms of their new agreement, Rick stood in the background looking like a guilty child instead of the mastermind behind Forrester’s sabotage. Hopefully, he’ll regain his manhood while defending himself when Stephanie unleashes her fury after finding out everything he’s been up to.

As for Rick’s sister, Bridget made some major changes in her life this week. Apparently she is a brilliant closeted fashion designer who has harbored these talents her entire life. I’m fine with that because Bridget needs to lighten up and have more fun. I’m all for getting her out of the hospital, but would she really go work for her father’s competition? I imagine Eric will be a little crushed when he finds out. And even if Bridget is super busy being a doctor and designing on her off hours, wouldn’t she somehow still be aware that Jackie M used stolen Forrester designs? Regardless, I think this will give Bridget a much-needed shot in the arm, but I am worried about it pulling her back into Nick’s orbit. Bridget needs to have easygoing, angst-free fun and I think Owen is the person for her to do it with, not Nick.

I had to laugh during Monday’s episode when Brooke came to see Ridge in his office to talk about their designs being stolen. She wanted to offer him some inspiration to create a new line and did that by having sex with him. It was hilarious! I’ve read many of our readers’ posts complaining that sex is this duo’s cure for everything and after Monday I finally agree. I thought they were going to go at it again on Friday when Ridge was busy working on creating a new line, but thankfully, they just fought instead. Don't get me wrong, I like Ridge and Brooke as a couple, but all their inappropriate sex is getting comical. And how many times is Stephanie going to walk in on Brooke modeling her underwear? It’s getting old.

One last thing – I hope we see more of Clarke. Now that he’s been dusted off, they should use him more than just for a couple of throw away scenes during a fashion show.

So those are my thoughts, what are yours? Feel free to comment below, whether you agree or disagree with me!

More Bold and the Beautiful Wardrobe...

The Bold and the Beautiful's Jack...