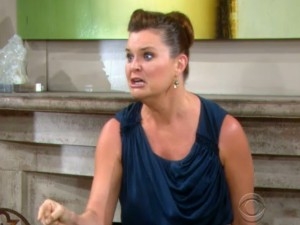 Big drama to start the week and something intriguing to end it. Nice! Thoughts:

Chow time.
Caroline has had moments lately where she’s been just too over-the-top. It’s not good because she loses her humanity and seems ridiculous. Keep her real, but quirky and mischievous! It was also a bit much that she was telling Rafael how to write his own web series, but you’ve got to suspend disbelief sometimes. As for Maya and Carter, they had more chemistry while ‘acting’ than they do otherwise. Saucy!

The lowest low.
Epic drama on the Brooke/Bill reveal! Who didn’t relish every minute of the soapy histrionics? Many complained about Taylor’s motives and lack of professionalism, but where would we have been this week without her determination and questionable ethics? There’s absolutely nothing like one rival getting and dishing the goods on another on a soap. In any case, this is what “B&B” excels at – the big drama, and boy did this situation deliver. Taylor with her smug confidence, Brooke with her silent crying, Bill with his grim bluster, and Katie with her scathing recriminations and tremors of emotion. Brilliant! For a time, we were all on the edge of our seats waiting to see which way Katie was going to go on forgiveness…riveting stuff.

Rick’s rally.
The exchange between Rick and Hope about Brooke was priceless. “We don’t have all the information yet,” he cautioned. Hope retorts, “Like what? She forgot Katie was her sister?” Given Rick’s recent run-in with Bill, it was surprising he didn’t have more to say on the matter.

A criminal act.
The future's not looking so rosy for lovebirds Taylor and Eric now that he's disgusted with her actions. Yike.

No further contact.
It's no surprise that Liam can't understand Steffy's actions. If we didn't know the actress was on a break, we wouldn't get it either as it's not like the character not to face things head on.

Crazy romantico.
Okay, so Hope's upset that Liam called Steffy, yet she's been letting this Wyatt dude kiss her repeatedly. Granted, he's super-cute, but still... Anyway, let's get to the nitty gritty. The last time Wyatt bent over to kiss her, it was revealed that he was sporting a sword necklace. The Spencer sword? Intriguing...

Fireworks.
Rick had the reaction that Caroline anticipated when he saw Maya making out with Carter onscreen. Do you think Rick was over-reacting? Vote:

Find out who reflects on painful memories on True Blood.