She must never find out!
If Brooke, Eric, Donna, and Bill all want to make sure that Katie never finds out the secrets they're keeping, why do they constantly whisper about it when she's around? So funny.

Party planning with a twist.
It was pretty ingenious to have the party planner spill the beans about Brooke's seductive set-up for Eric to Taylor. Nice one. Personally, I think Taylor should have opted for the foam party.

Look at her now.
The contrast of Taylor unraveling what Brooke's been hiding with Katie going on about what a paragon of perfection Brooke is as a sister was awesome. The anticipation for Taylor to discover Brooke's secret and for Katie to find out built simultaneously. Regardless of whether you're pro-Taylor or pro-Brooke this is soap opera drama at its best. Who else had butterflies in their stomachs when Taylor arrived with all of her newly-discovered information and rediscovered anger simmering below the surface? Of course no therapist in their right minds would blurt out highly-sensitive information that could potentially kill their own client, but Taylor will! Can't wait to see Katie's blockbuster reaction when it all comes out...

Let us know what you think Taylor's real motives are by choosing the answer closest to your opinion below:

Check out Soaps.com's Celebrity News to find out who Courtney Cox is dating. 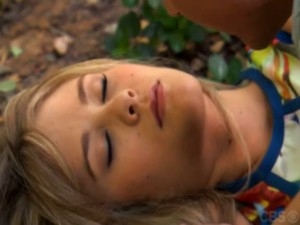 It was a real mixed bag on “B&B” this week, with the drama building tremendously by Friday. Thoughts:

Real-life fairytale.
Judging by the insane amount of giggling Hope was doing at Big Bear, she was clearly overcome by the prospect that every fairytale fantasy she’d ever entertained was coming true; it was like we accidentally put on the Disney channel. Not only did the ‘woods man’ give her a kiss to awaken her, but he later showed up (standing beneath her balcony no less) to return her lost shoe, er, phone. What a prince. Wyatt’s easy on the eyes so he gets a pass for now, but Hope’s dippy behavior only made her seem more like a teenybopper and less like a candidate for a real adult relationship than ever before. Obviously a new dreaded triangle is in the works with Hope at the center of it. Ack.

Go dazzle.
Carter’s legal mind must have deserted him while on the set of the web series if he didn’t figure out in two minutes that Maya showing up was Caroline’s doing. Caroline’s reunion with Raphael was enough to make the head hurt – too much squealing. Naughty Caroline is entertaining, but it’s hard to believe someone with her supposed confidence and worldliness would allow the scent of her expensive perfume to be overpowered by the reek of desperation. It would have been much more believable, and so much more fun, for her to flaunt a sexy new relationship in a bid to turn Rick’s head back her way. As for the web series, there’s no doubt that they’ll sell Carter and Maya as this steamy hot onscreen couple and Rick will become disproportionately jealous. Yawn.

The Bold And The Beautiful Saturday Teaser Poll: Blame