Kyle Lowder Gives Soaps.com the Scoop on The Bold and the Beautiful! 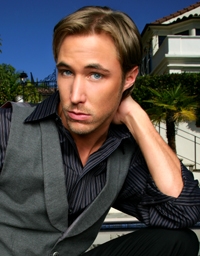 Rick’s been through quite a bit the last couple of months on The Bold and the Beautiful: he got dumped by his fiancée, Taylor; he became paralyzed after a fight with Ridge led to him falling off a rooftop; he tried to sabotage his mother’s relationship with Ridge; he drove the car that led to Phoebe’s death; he became involved with Phoebe’s sister, Steffy; and now, he has betrayed his father by stealing his designs and giving them to the competition. That’s a lot of drama, even for a soap opera! However, when I talked with Rick’s portrayer, Kyle Lowder (albeit before the reveal that Rick was the one to steal Eric’s latest fashion collection), he assured me he wouldn’t have it any other way.

“Especially in this particular genre, the tendency is to sometimes have a character that is one sided,” he explained. “I think over the past couple months, since last fall basically, we got to see every single aspect of [Rick]. Just because he’s young and rich and successful and an international playboy, or whatever you want to call it, doesn’t mean he doesn’t have issues and a lot problems. We got to see all of those things and for me, playing the role hasn’t been boring. It has given me the opportunity to challenge myself as an actor in the role.”

Not only does portraying the complexities of Rick’s personality keep things interesting for the actor, but it also keeps the viewers interested in what’s happening onscreen, whether they agree with the character’s choices or not. If the Soaps.com message boards are any indication, Rick sparks some emotional reactions in the viewers, both good and bad. However, after finding himself with some down time over the holidays, Kyle perused some boards himself and while most of what he read was positive, he decided keeping up with the fans’ opinions wasn’t such a good idea.

“When you read so many people’s varying opinions or even so many people’s one opinion of how good you are, or how bad you are, I think as human beings we tend to gravitate towards what people want and I think that’s a danger zone for me,” he mused. “I have to do what Brad (Bell, B&B Executive Producer/Head Writer) wants, what he’s looking for in the characters, and ultimately, I have to do what I feel is best for the character at the same time and not try to appeal to the hundreds of thousands of varying opinions.”

That doesn’t mean he doesn’t appreciate the viewers loyal support of the show, as he emphatically stated, “I want to thank the viewers and the fans for their support because it does mean a lot and it doesn’t go unnoticed.”

Even though B&B has a loyal fan base throughout the world, they don’t exactly all agree on everything that happens on show, especially the recent pairing of Rick and Steffy. Considering he dated and was engaged to Steffy’s sister and mother respectively, it’s understandable fans would be a bit uncomfortable with this new union. While Kyle understands this reaction, he also thinks people need to suspend reality in order to get into the spirit of the couple.

“Rick and Steffy, yes, if you look at the circumstances of their past and of coming together, yeah, I mean Rick slept through the fam. Not exactly a great start to a relationship,” he chuckled. “If [you] watch this show and directly compare it to reality then you won’t be able to get into it and you won’t enjoy this show.”

While the fans may be divided on Rick and Steffy, Kyle has a definite opinion on the duo, saying, “I believe in this couple. Did they come together fast? Absolutely, but I’m not going to dwell on that. It was written the way it was written and that’s fine. I myself have to practice what I’m preaching right now, otherwise I’ll get too caught up in the fact that this would never work and then I won’t feel passionate about the relationship and the chemistry will fail. Then you have a couple that will fizzle out and I don’t want that.”

Defending some of Rick’s questionable behavior and rash decisions by describing his character as a look-before-you-leap kind of person, who also wears his emotions on his sleeve, Kyle believes that Rick is absolutely in love with Steffy at the moment and not just looking for another way to stick it to her father and the thorn (no pun intended) in his side, Ridge.

“I will say with a passion, I don’t know what’s in the future for this couple, I just take things day to day, but I do know for a fact that right now Rick is absolutely head over heels in love with this girl. I do know that. That is fact. I’m not giving anything away by saying that,” he declared. “Phoebe died and they were drawn to each other in a moment of intense, raw emotion and grief. It started that way, so be it, but it opened up the floodgates for them to be so vulnerable and so raw with each other from the get go. I think maybe it started out that they were bonded with each other and mistook it for love and I’ll buy that, but I think at this point in time, right now, that Rick absolutely is in love with her.”

That may be true, but now that Steffy knows Rick was the one to give Jackie M the Forrester designs, does this mean they’ve come to the end of the road? According to the actor, this couple is far from over.

“Let’s just say what we’re seeing right now airing, the relationship between Rick and Steffy, that’s not going to be a flash in the pan. That’s going to have a lot of different levels and a lot of depth coming up and how it affects people around them,” he previewed. “So viewers, brace yourself. If you hate them as a couple, I apologize. Learn to like them.”

There was so much more that we talked about, so if you want to know which co-stars Kyle feels makes him a better actor, what he had to say about being mocked on “The Soup” and what he thinks about his former Days of Our Lives character being recast, check out the rest of our interview on our sister site, Soap Opera Fan Blog.

The Bold and the Beautiful Weekly...

More Bold and the Beautiful Wardrobe...