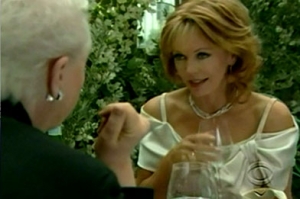 B&B Breakdown for the week of January 19!

This week, B&B pretty much solely revolved around Jackie M using the stolen Forrester designs and I for one loved it. It gave us mystery, characters we haven’t seen in awhile and of course, fashion.

Nick and Jackie received the Forrester designs from a mystery person named Stormy Seas and tried all week to figure out who it was. As I said last week, it was a whodunit, but it wasn’t a murder mystery, which we’ve seen a million times on soaps, and that made it all the more fun. It was interesting to watch Nick and Jackie talk to the prime suspects all week, while we, the viewers, were left to try and figure out who the culprit was. Thorne and Felicia certainly had reason to do it as they feel like the forgotten Forrester children; Stephanie had reason to give Jackie M the designs because she’s angry at Eric for letting the Logans infiltrate the family business; and Katie had reason because she wants to help Nick get back on his feet financially.

Not only did we get a little intrigue mixed with fashion (what B&B is based on), but we also got to see Clarke, Nick, Jackie, Thorne, Felicia and Katie, characters who haven’t had much to do lately. Hopefully that will continue even though the mystery has been solved.

And just who is Stormy Seas? None other than Eric’s recent golden boy Rick. Did anyone see that coming? I have to say I was surprised when I learned it was Rick, mainly because I don’t really see his reasoning for doing it. He told Steffy it was his way of making sure they could be together, but how does him switching fashion houses change anything? They will still live in the same town and Ridge will still hate him. In fact, Ridge will hate him even more for giving away his hard earned work to the inferior competition. Furthermore, how could Rick do this to his father? The man whose love and respect he’s been so desperately trying to earn for the last few months?

While his reasoning doesn’t make a whole heck of a lot of sense to me, it should provide a lot of follow up drama, especially if Rick really is going to run Jackie M.

I was also a bit confused by Steffy’s extremely emotional reaction to learning the designs were stolen. I’m guessing she didn’t design them herself, so why the tears? I get she’s upset and wants to protect the company, but it was a bit much. Maybe it’s just a side effect of losing Phoebe.

The fallout should be great, especially when Stephanie finds out what Rick did. ***Spoiler talk*** I recently interviewed Kyle Lowder (Rick), which will be posted early next week, and he promised a lot more tension between the two characters! He also previewed that Rick and Steffy detractors need to learn to accept them, because they aren’t going anywhere anytime soon!

Aside from the battle of the fashion houses, we got a brief scene involving Bridget and Owen. While I would have liked to have seen a little more build up to their kiss, maybe more flirting and some sexual tension, I am happy to see Bridget getting involved with another man. I just wish they would be onscreen more, but maybe once all the fashion backstabbing dies down, we’ll get to see more of their burgeoning relationship.

So that’s my take, what about you? How did you feel about Rick being the culprit? Are you looking forward to the fallout? Share your thoughts with Soaps.com below.

Bryan Genesse Returns to The Bold...