To the grave.
Donna is confusing. She appears to be furious with Bill, but not with Brooke, although one would think Brooke's betrayal of Katie would be considered even worse than Bill's. It would be great if Donna would get so upset she'd blurt out the truth to Bill.

Our second chance.
Brooke's hounding of Eric just became so relentless and repetitive by week's end that it was straight up horrible. Thankfully he's held out, but it's anyone's guess how much more fight he's got in him. Should Eric give in to Brooke? Vote in Soaps.com's B&B Eric’s Choice poll.

Not under your spell.
Bill wanting to address the issue of Brooke moving on and then to hold her one last time (hadn't he already done that?) belies his assertion that he is in no way allowing himself to fall under her spell.

Get the scoop on Brooke Mueller's support payments from Charlie Sheen. 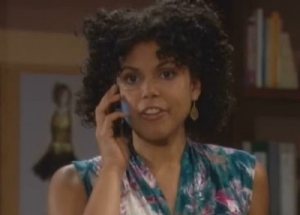 “B&B” wasn’t quite as enjoyable this week what with Hope/Liam/Steffy revisiting triangle issues, and Brooke harping on Eric with the same stuff daily. Tylenol time! Thoughts:

Can’t let you in.
Maya should have opened the door to Rick before Alison could protest. I’d have liked to see her explain her presence in Maya’s apartment. In any case, Maya was between a rock and a hard place and had to dump Rick. It’s still puzzling that Bill would want his niece settling for someone who’s into someone else, but such is the way of “B&B.”

Super-lawyer.
Carter really gave off a heebie-jeebie vibe in the office with Maya. How creepy to try and push himself on her when she’s talking to him about Rick. Ew!

Lemon bars and lingerie.
Loved Pam and her comic relief! Sometimes when the drama gets to be just too much, she and her lemon bars are exactly what is needed to provide a little levity. How hilarious was it when she was parading around in lingerie and black stockings on Friday’s episode? Pam’s Boudoir, haha! The looks on Eric and Taylor’s faces were priceless. Pure gold!

Insensitive?
Brooke told Hope she wasn’t being insensitive to consider a future with Liam now that his baby is out of the picture, because she was ‘robbed’. Sigh. Steffy had it right when she told Hope if Liam was only with her because of the pregnancy he’d go back to Hope under his own steam. Hovering and calling him in a situation like this is beyond tacky. As for Liam’s conversation with Bill about Steffy and Hope. Yuck.

The Bold And The Beautiful Saturday Teaser Poll: Protection