Also, vote in our Genoa City Throwback Thursday Y&R Poll: Malcolm And Olivia's Divorce and read our After The Soap Finales: Where Are They Now to find out what actors from "As The World Turns," "Guiding Light," "Passions" and others are up to these days.

In this week’s Throwback Thursday Soaps.com takes readers back to 2006 when Bridget Forrester lost her baby…

Katie was there to support Steffy this week, and years ago Dante and Felicia helped Bridget get through the loss of her baby. After Nick and Bridget lost their daughter Nichole, who’d been stillborn, their marriage had fallen apart. Bridget had agreed to raise Felicia’s son with Dante when Felicia feared she would die of cancer.

Dante and Bridget grew close while taking care of his son, and when Felicia survived the cancer she and Bridget competed for his affection. Bridget ended up going off to become a doctor and realized she was pregnant with Dante’s baby. It wasn’t long after she told Dante the news when Bridget miscarried their child. Felicia and Dante rallied around her while Bridget grieved.

Did Dante plan to leave Felicia for Bridget before she lost their baby? Vote below.

The Bold And The Beautiful Spoiler Video: Brooke's Plea 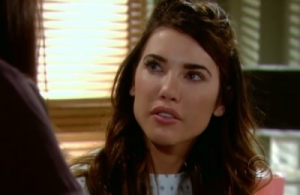