Vultures.
Was anyone else a bit stunned to hear Katie and Hope speculating on the future of Steffy and Liam's marriage just days after their baby died? It only got worse from there, as Hope took to texting Liam until he finally stopped over. She then proceeded to inform him that the reason for his marriage was now gone (like he needed reminding!) and that he was now free to choose something different. Wow! Talking about their dead baby like it was just an inconvenience keeping them apart... This would be shocking stuff coming from anyone so soon after a tragedy, but coming from Hope it seemed even more so. Pregnancy or not, Liam is married to Steffy now. Hope acting as though marriage means nothing was also new for her. The whole conversation was distasteful, and also hugely presumptuous. Also offensive was Liam not calling her out; nothing new for him, but offensive all the same. What did you think of Hope's actions? Let Soaps.com know by voting in our B&B Heartless Hope poll.

I need you to fix this.
Such intense scenes this week as Brooke badgered Eric to the point of him almost pulling his hair out! We all felt that way, even as we admired him standing up to her. The woman is relentless! What nerve trying to make Eric feel guilty when she's the one who did Katie wrong. It was amazing to see Bridget, however, even if she was merely a prop in Brooke's manipulation. When begging, pleading, and ordering in their kids and catering didn't work, Brooke finally resorted to putting Eric into a magical sexual trance on Friday. Good lord, Eric, snap out of it! 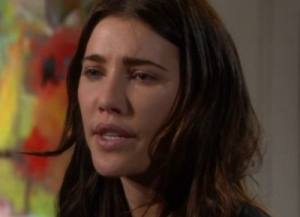 There was some powerful material this week on “B&B.” Particular treats were Steffy’s emotional scenes, and Eric standing up to Brooke repeatedly. Thoughts:

My baby!
Steffy’s agony and guilt has made for some very moving and raw emotional scenes. It really made you feel her pain, but also how complicated it all was, given that she made the choice to ride the motorcycle. Liam going off on Bill to express his anger and disappointment was also extremely powerful. Such good material!

Back in the slammer.
It’s a tad unbelievable that Bill is spending his time and resources enabling one of his family members to hold onto a Forrester, but there it is. Maya looks to be between a rock and a hard place now, what with the photo. It will be interesting to see if she’ll be able to work her way around this…perhaps with Carter’s help?

The Bold And The Beautiful Spoiler Video: Maya's Threat

The Bold And The Beautiful Saturday Teaser Poll: Warning