Emptiness.
The happiness Steffy and Liam shared is on thin ice now that she blames herself for losing their baby, and he apparently does too. Such powerful scenes between Liam and Bill! Most heart-wrenching, however, was the scene where Steffy realized that she'd lost the baby. So sad and emotional! It will be a complicated road forward for the newlyweds now - especially with Hope hovering.

You are the father.
Wow! Brooke is certainly presumptuous. Never mind that Eric is living with Taylor, Brooke just informs him that he will be the father of her child. As though he owes her some enormous debt or something. Gah! I would love to see him refuse, so she would have to face the music, but it's not likely to happen. He will likely kowtow to Brooke's demands and sacrifice to protect Katie - something Brooke should have done when she was in the bedroom with Bill.

Read about the return of Keifer Sutherland in 24. 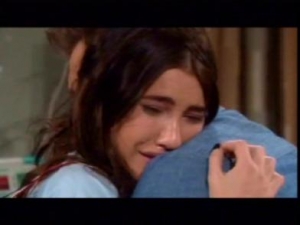 Credit: You are the father. (CBS)

It certainly wasn’t a ‘feel good’ week on “B&B” as Steffy lost the baby, Brooke continued to deal with her dilemma, and Maya was framed. Thoughts on the week:

Uncle Bill’s blackmail.
At first it seemed ridiculous that Bill would put himself out for Caroline, whom he had nearly disowned, or that she would even go to him. However, given that Caroline’s had a personality transplant and is no longer all about honesty and integrity, and Bill always welcomes a way to have someone indebted to him, it’s not so unbelievable after all. It’s humorous how Alison always adds her observations to the mix before running off to do Bill’s bidding. I think she likes living on the edge!

Jesse’s girl.
It’s not hard to see a future for Jesse on this show – sexy, semi-reformed bad boy. Rawr! I’d love to see Caroline fall for him while fighting it every step of the way. He has great chemistry with his ex, Maya, too, so there are plenty of possibilities. The set-up at the nightclub was pretty transparent, but the photograph will probably be all Bill needs to convince Maya to ditch Rick. We’ll see. Do you think Jesse should stick around? Vote in Soaps.com’s B&B Jesse’s Potential poll.

The Bold And The Beautiful Spoiler Video: Emptiness

The Bold And The Beautiful Saturday Teaser Poll: Sharing