Making up is hard to do.
Just when we'd reached the limit with hearing Hope refer to Liam as a possession she had ownership of for the umpteenth time, she decided to make nice. Though it was 'convenient' that Hope and Steffy had this close encounter before Steffy got in an accident, it was also a touchingly genuine moment between the girls.

Best time of my life.
Gah. It was pretty obvious with how ridiculously happy Liam and Steffy have been that something awful was going to happen...and now it has. As soon as she saw the motorcycle I knew - and did they ever draw out that ride - such tension! There's probably very little chance they won't lose that baby. It's a little disappointing for this to go such a predictable route. Worse, we're all thinking the same thing... It's happening so that the dreaded triangle can go another round. No! 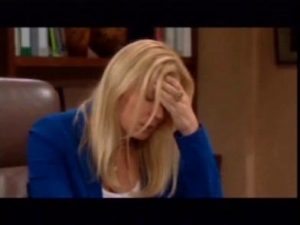 It’s been a stunning week or so on “B&B” what with Brooke turning up pregnant and now Steffy’s baby appearing to be in jeopardy. Oh my!

It was a mistake.
Brooke’s agony was evident this week, but it’s pretty hard to feel for her on this one. Really? She – oops – just made a mistake by believing that Katie was giving Bill to her and was done with him? Who gives their sister their husband? So messed up! How could she honestly think Katie was over it when she was so upset? Just kind of ludicrous the justification she’s giving Donna for how this happened. As for Donna, she’s all over the place on this topic – one minute she’s saying Brooke can’t possibly keep this from Bill, and the next it’s ‘no one ever has to know’. Incidentally, it’s hard to believe Brooke’s been able to hang all over Eric at Forrester without Taylor appearing. Who else thinks she’ll show up and ‘sense’ Brooke’s pregnancy with her ultra-sensitive Brooke radar? As annoying as this stuff can be, it’s Taylor’s reaction to the pregnancy that would be ‘must see’ TV. Gotta’ love this rivalry. It will be interesting to see if Brooke’s plans surrounding the pregnancy will include Eric… What do you think Brooke should do? Let us know what you think by voting in Soaps.com’s B&B Brooke’s Dilemma poll.

Caroline and Carter.
Caroline was a nice mix of her old and new self this week. That said, it’s disconcerting watching her scheme and throw herself at Rick, when she’s clearly realized he’s more interested in Maya. Likewise, Carter keeps sniffing around Maya, when he too knows that he would only be a consolation prize if she can’t have Rick. As for Caroline bringing in Uncle Bill, aka, the ‘in-house psychic’, I guess the apple doesn’t fall far from the tree.

The Bold And The Beautiful Spoiler Video: Eric's Promise

The Bold And The Beautiful Saturday Teaser Poll: Witnessed