For a good cause.
So, who cares if Caroline is using her foundation to show off for Rick - it's been nothing but entertaining! From Caroline's bitchy little jabs at Mona, Myra, er, Maya, to her squealing and scheming, she's stole the show this week. The icing on the cake was the charity fashion show itself, where she set aside the kooky persona long enough to pay an emotional tribute to her Aunt Caroline. The fashion show itself was great eye-candy! So funny that Pam told Donna and Brooke they should have got Bill Spencer up there. She was right though - the Stallion would have stolen the show. Can you imagine Brooke in the audience with the mystical look of destiny in her eyes? Anyway, the show ended with Caroline planting one on Rick on stage. I think it's bizarre how Rick keeps letting Caroline kiss him while he's all about Maya the rest of the time. What's up with that?

Preggers.
First, it was extremely weird that Brooke, at her age, was surprised by the idea that she might be entering menopause. Second, pregnant?! Brooke and Bill just had sex like, a few days ago! Hoo-boy... Anyway, this presents a variety of scenarios. Either Brooke's going to have to pass it off as someone else's (but Bill will know the truth), or Brooke and Bill will have to 'fess up and rock Katie's world. How many heart attacks can one person have and keep on ticking? Just wondering... Admitting this openly also means being judged by everyone, including their children. Hey, Liam and Hope will share a sibling... What do you think of Brooke being pregnant? Let Soaps.com know by voting in our B&B Brooke’s pregnancy poll. 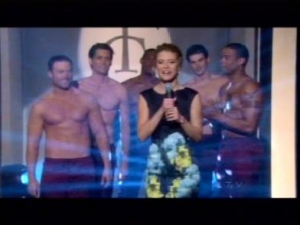 Lots going on again this week on “B&B!” Absolutely loving the variety – and the eye-candy of the fashion show. Brooke’s ‘shocker’ at week’s end was not a surprise, but was dramatic nonetheless! Thoughts:

Watch what you say to me!
Eric managed to get himself caught in the middle of Taylor and Brooke’s latest catfight. It’s just a little disturbing how they listen to him like he’s a father-figure, and then argue over who can bed him. Of course Brooke’s claim was that she could have him if she wanted to, and my money says she’s right. Despite Eric’s declarations to the contrary, I don’t think the old sod would be able to resist if Brooke got him alone and was determined. Taylor may sense this too, since she dialed down her badgering after Brooke’s warning. While I enjoy the rivalry between Brooke and Tay, I just wish Taylor would be a tad cleverer about her sleuthing and less in-your-face. As for Brooke, it’s amazing how she can look people right in the eye and deny, deny, deny. Soapy drama!

You didn’t!
Why isn’t Donna angrier at Brooke? Explain!

So secure.
Steffy and Liam’s happiness this week continued to be off-the-charts, which can only mean one thing on a soap opera – impending doom. Say it isn’t so! If anything happens to this couple, we’ll be back to the dreaded triangle before we’ve even properly got free of it. No!

The Bold And The Beautiful Spoiler Video: Fundraiser

The Bold And The Beautiful Saturday Teaser Poll: Get Together