The Bold and the Beautiful’s Harley Graham in Two Movies!

Harley Graham, who plays Thorne and Darla’s daughter Alexandria on The Bold and the Beautiful, has two new movies coming out!

Her first project, “Six and a Half”, is a short film, which has been selected for the annual Slamdance festival. The film is about a little girl (Graham) who tries to catch a frog in a pond, but gets hurt in the process. She blames the frog and seeks revenge. “Six and a Half” is only five minutes long and will screen at the festival on January 17 at 8:30 PM and January 20 at 6:00 PM.

Held in Park City, Utah, Slamdance’s sole mission is to nurture and support truly independent works. They are known for premiering new films by first-time writers and directors working with limited budgets.

Harley will also be seen in the feature length film, “Dance Flick”. In the grand tradition of “Scary Movie” and “Date Movie”, “Dance Flick” is written and directed by the Wayans brothers and spoofs (what else?) dance movies. Harley will appear as Cindy Brady in the film set to be released in August of this year.

Soaps.com congratulates Harley Graham on her new projects and can’t wait to see her on the big screen!

Ex-B&B Star Jennifer Finnigan in What Color is Love? 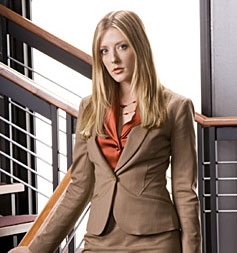