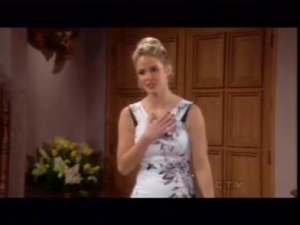 The show moved at a good pace this week and continued to focus on numerous characters – awesome!

Ring.
Well, Katie woke up kicking her own butt for ever doubting her husband and sister. Gah! As for Brooke and Bill, the heart wants what it wants and all that, but it’s still not possible to feel a thing for Brooke when she sheds tears over her stallion – they just moved way too fast and behaved too selfishly – the inappropriate factor of it all is just too high to get on board with their forbidden love. Unfortunate, because they do share amazing chemistry – perhaps if this had all played out differently… In any case, it looks like Bill will try again with Katie. It will probably go well until the Bill/Brooke tryst is revealed. I wonder if Katie will have another heart attack? Talk about nine lives! Did you feel sad for Brooke and Bill this week? Let Soaps.com know by voting in our B&B Goodbye Stallion poll.

Carowhine.
It has to be said that the ‘new’ Caroline seems to get more hilarious with each week that goes by. It’s still offensive that a character can completely change without viewers being given any kind of explanation, but in this case, the change added to the character’s entertainment value. That said, she may not have the same potential as long-term leading lady she had before, but it’s all good for now. Get this girl a hot guy to be her playtoy!

Carter non-starter.
Carter may be sporting an 8 pack, but otherwise the character's sort of dry and dull. Also, it was weird that he asked Liam if he'd introduce him to Marcus' real dad, Justin. Why wouldn't Marcus have done that? Where is Marcus anyway?

Motorcycle mama.
It was such a relief that Steffy and Liam were allowed to be genuinely happy in the lead up to their wedding instead of marring it with a bunch of 'dreaded triangle' innuendo and doubt. All the family interactions were really well done too - realistic dialogue as opposed to saying dippy things that make it sound like they're living in a fairytale just because it's a wedding. Liam's words to Hope were believable too - people do think about paths not taken. Anyway, it was classic Steffy to roar up the driveway on a motorcycle dressed in a black lacy outfit - loved it!

Get the scoop on Matt Damon's Caribbean wedding.