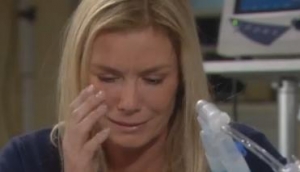 It was a fairly dramatic week of “B&B” what with the emotion and confrontations at the hospital. The wedding-related story at week’s end was a nice lift.

Everything’s different now.
The week kicked off with many trying to shake off the ‘ugh’ factor of Brooke and Bill hitting the sheets mere moments after Katie washed her hands of him. I think what added insult to injury was the afterglow bit, since they appeared to have no guilt, or a thought at all for Katie. Wild! At the hospital, they seemed almost as concerned about whether they were going to get blamed, as they were about Katie’s prognosis. I loved the vintage Brooke moment where she sat at Katie’s bedside and tearfully professed her love, saying, “I’d do anything for you.” Hehe. Yep, anything but stay away from her husband when she asked you to! The Bill/Taylor snarkfest was pretty good too. Anyway, I expect Katie will wake up and asks Bill to try again – thereby throwing another triangle into being. Gah.

Dazzled.
Caroline has become part annoying, part hysterical. She was a hoot at times this week. Her surprising attraction to the, er, musculature of Hercules the adult film star, was unexpected and pretty funny. She's had a few good one-liners too - her mocking baby-voiced condemnations of Maya absolutely make me snicker. This girl definitely changed completely after she fell on her head. So, what's Dayzee's excuse? I could live with them altering one character's personality for the sake of a storyline, but two is excessive. It will be interesting to see how these two react to Maya becoming the face of Hope For The Future. I love the idea and also love what it will stir up. I hope Thomas doesn't get that starry-eyed look when he sees their new spokesmodel! What do you think of Rick hiring Maya? Let Soaps.com know by voting in our B&B Rick's Decision poll.

Wedding plans.
I enjoyed the happy-go-lucky in love scenes with Liam and Steffy this week - it was a welcome contrast to the nastiness going on over at the hospital. That said, I don't know why either of them would want to get married where he had planned to marry Hope. As for Hope and Taylor's clash - all I could think was that Hope was so determined not to run into Steffy that she asked her to quit her job, and here she was telling Taylor she's not going to go out of her way to avoid Steffy and Liam. Craziness! I hope that eyeful Hope got of Steffy and Liam kissing and so on will help her (and us!) finally move on.

Find out who professes love to Beauty And The Beast's Cat.