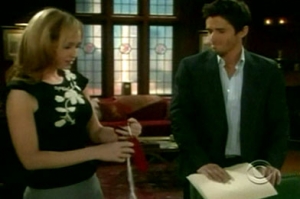 Things have changed for Steffy and Marcus. (Soaps.com)

B&B Breakdown For the Week of January 5.

Bridget’s Back!
It was so good to see Bridget again and for her to actually have something to do! I’m excited about her and Owen and can’t wait to see it unfold. However, I don’t believe she would have shown up at Owen’s ready to seduce him out of the blue. In my opinion it just didn’t fit with her character. I was also really hoping for some follow through on their encounter. Based on Bridget’s reaction, I assumed Bridget was thinking Owen was gay when she saw the candles and wine and Owen said the dinner was set up for him and a ‘buddy’, but we never got a real reaction. The next scene should have been Bridget running into Donna and making a comment about it. Instead, once again, it was just left.

Pam’s Latest Target?
The whole Pam/Owen scene leading up to Bridget’s visit was kind of weird as well. I sort of get why Owen had Pam come over – so Donna wouldn’t have to deal with her while they worked – but his nervous/stressed out reaction was unclear. And why did he send her upstairs? I didn’t really get it and once again, no follow through on it. Is Pam going to obsesses over Owen now? Hopefully we’ll find out.

Speaking of Pam, she better get crackin’ if she’s going to single handedly crochet the thousands of bikinis that were ordered!

Rick vs. Stephanie
Rick and Stephanie’s face off in his office was great. While I understand why Stephanie wants some sort of justice for Phoebe (she’s clearly still in the anger stage of grief), I loved that Rick gave back as good as he got. Each actor portrayed their character in a very controlled manner, so there was no whining or hysterics. Kyle Lowder (Rick) and Susan Flannery (Stephanie) did an excellent job in those scenes and I can’t wait to see what happens with Eric’s decision.

A New Man For Taylor?
I’m not sure why we haven’t seen more of Taylor dealing with the death of her daughter, but I think she needs to start moving towards her own storyline now. Maybe she can seek therapy, or start to act out in strange ways, or find a nice man friend to confide in who will later turn into something more.

So if Taylor were to have a man, I was thinking maybe it could be an actor who is leaving, or recently left a fellow soap. Of the recent crop of exiting actors, who do you think should come to B&B and romance Taylor?

Ridge
Many of you have commented how quickly Ridge has seemingly gotten over Phoebe’s death. However, that may all be just a cover as the spoilers indicate Ridge may be headed for an emotionally rough road, especially next week. Keep an eye on our spoilers page to find out more.

Speaking of Ridge, what did you think of the steam room scene? I’m all for sex scenes, but I thought it was a bit over the top with all the talk of shrinkage and turning to stone. It’s amazing what they can get away with on Daytime.

Poor Marcus
I didn’t really feel bad for Marcus when Steffy turned down his marriage proposal. I haven’t felt the love between them for a long time, especially since we haven’t seen him console her after Phoebe’s death. His demeanor has also been a bit too chipper towards Steffy considering she is devastated about her sister. Phoebe’s death was like an afterthought to him instead of the main issue. I was surprised that Steffy said no though. I thought they would have her say yes in order to help her try and forget Rick and then it would add all kinds of extra angst for them. I have to say I’m happy they didn’t go down that road though because we’ve seen it a million times. But what will become of Marcus now? I think it’s high time his dad entered the scene. How about you?

Alright, those are my views on this week. How about you? Please share your thoughts below.

Video Preview Clip of Today's The...