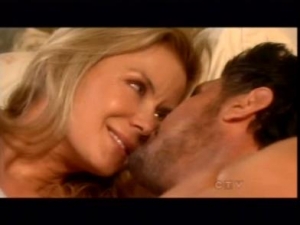 It’s been another very interesting mixed bag type of week on “B&B.” Thoughts on the latest events:

Brooke to the rescue.
The entire premise of Brooke rescuing Bill following the car wreck was silly. If Bill crashed that car hard enough to wind up unconscious on the air bag, chances are it wouldn’t have been drivable. What about witnesses? The most ridiculous part was Brooke phoning Katie to tell her that Bill was staying the night at her place and then not letting her talk to him! “B&B” loves this bizarre little plot device – remember when Marcus called to talk to Dayzee before their wedding and Stephanie wouldn’t let him? The fact that no one would ever do this – especially without providing some kind of explanation – just doesn’t seem to matter. It’s hilarious!

You should have come home.
The showdown between Brooke, Bill, and Katie the next morning was dramatic goodness, with Katie’s hysteria becoming just a hair annoying. She really told Brooke off though! Conveniently for half-dressed Brooke and Bill, Katie went from 0 to divorce in less than sixty seconds, and stomped off to leave them to do what they’ve wanted to do for eons.

Quite a filly.
Even with the cheeseball 'Stallion' and 'Filly' references, Brooke and Bill have an crazy amount of sexual chemistry. I was looking forward to the day when they'd have a legit reason to get it on. Unfortunately, the day they chose just seemed too soon to forget about Katie - someone should have put on the brakes. Now that she's in the hospital it will be bye-bye afterglow, hello guilt city. Had they waited until a time in the future when Katie had chosen to move on with someone else or whatever I could have popped my corn and really enjoyed the Stallion and Filly show. How do you feel about them giving in to passion when they did? Let Soaps.com know by voting in our B&B Stallion and Filly poll.

Is she for real?
Maya's words about Caroline couldn't have been truer. Over the past few weeks, Caroline's become a joke - a caricature. It might be funny if we hadn't known the first incarnation of Caroline - so much was made of her being just like her beloved late aunt! Adding insult to injury is Dayzee taking part in the campaign against Maya - totally unlike her to be selfish about Maya 'infiltrating' her life. Judging by how little patience Dayzee had for Caroline at lunch it's actually a wonder she doesn't want to get rid of her instead of Maya. As for Rick - why the hell is he continuing to date Caroline if he's into Maya? Confusing...

What might have been.
As long as we're questioning the bizarre - why is Hope suddenly an authority on babies and pregnancy? Why is Hope spending mornings with Will at the house where she put a golf club through the window? At least she wasn't using her seductive woman-of-the-world voice for this occasion. It was back to the girly giggling about what her and Liam's fairytale life shoulda, woulda, coulda been like... She's like a wind-up doll that starts repeating the same lines over and over as soon as she sees her ex. Liam still shuffling his feet and muttering regrets is equally annoying.