Ride in my carriage...
The new version of Caroline is kind of funny and over-the-top, but it's definitely disappointing to see a smart, strong, caring female character reduced to a vapid caricature who parrots on about spas, shopping, and sushi. Of course, if she hadn't changed, no one would be rooting for Maya...so that's the way the soap cookie crumbles. As for Rick, it was odd that he knew Caroline found out he met someone else, yet he still kept letting her paw all over him. Why not cut her loose?

Stay away from my man!
Dayzee backed up Caroline when she delivered this line to Maya. What? Caroline and Rick aren't married - if he's interested in Maya, then Caroline needs to deal with it. Dayzee is another character who has morphed into someone we barely recognize. The old Dayzee would have been fair about the whole issue - may even have been Maya's champion. Dayzee's not the kind of person to change just because she married Marcus. What do you think about Dayzee's attitude toward Maya? Weigh in by voting in Soaps.com's B&B Dayzee's Attitude poll. 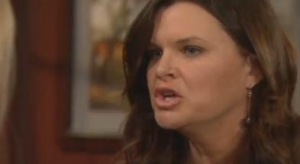 The Katie/Brooke/Bill drama made for solid viewing. Here are some thoughts on the week:

Rolling around in the bed.
Katie finally got wise to the potential for disaster where her sister’s concerned, but it was probably too late. Things have already gone too far between Bill and Brooke, who are mooning over each other whenever they’re apart – it’s practically destiny. They’re also justifying their closeness by blaming it all on Katie’s ‘demands’ – writing’s on the wall! With that said, Katie confronting Brooke was the definition of juicy drama!

You’ve changed.
Bill’s tirade about Katie changing since she became a mother is an interesting twist, because she has – but one could argue that he should have mellowed since becoming a father as well. As I’ve said before, the whole issue of Bill’s drinking was trumped up and is still unbelievable as this sudden bone of contention between them. In any case, Bill being Bill, he chose to punctuate his feelings by downing a shot every time Katie said ‘no’ – couldn’t help but love this scene. Of course it led to a bad decision – driving drunk, which is pretty ugly. Naturally it was Brooke he swiped off the road – like there was no one else driving in L.A. at the time. Gah!

The Bold And The Beautiful Saturday Teaser Poll: Rick's Advice