The numbers.
First, it was weird that Eric called a meeting about his personal life at work. Just sayin'... Second, Rick should have noticed the poor sales, but he hasn't been CEO for long so heaping blame on him makes no sense - but it does enable the conflict in the Taylor/Brooke feud to continue and heat up via Rick/Thomas. The renewed animosity between Taylor and Brooke has been very entertaining thus far, but it won't continue to be if it becomes repetitive like so many plot lines on this show are.

You owe it to me.
Oh please. When Steffy and Liam got pregnant it was before Hope was back in the picture with her 'truth' and Liam himself said the baby was conceived in love. Hope's such a little girl - you got the man so I get Forrester, it's only fair! Telling Steffy she told Liam to set a date for a wedding made it seem like the reason she did it wasn't for the baby, but to have something to throw in Steffy's face. Here's hoping Steffy tears a strip off of Liam, and refuses to marry the ass to boot! Was Hope right to ask Steffy to leave Forrester? Let Soaps.com know your opinion by voting in our B&B You Owe It To Me poll.

Are you trying to get my clothes off?
Surprise, it worked! Bill got Brooke's clothes off and they are flirting with disaster by embracing while she's in lingerie. As for Katie not 'being available' for her man - I think she'd better listen to Donna! Things were looking pretty hot backstage after the Brooke's Bedroom relaunch!

Get the scoop on Jennifer Love Hewitt's mammary protection. 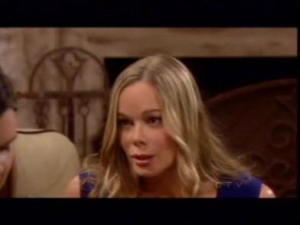 The variety of characters on the “B&B” canvas right now continues to make many viewers, tired of the intense focus on the dreaded triangle for so long, very happy. This week’s thoughts:

Crazy lovebirds.
I don’t think the lovebirds were anywhere near as crazy as Pammy, but the scenes where she showed up in the bedroom and hopped into the sack with Taylor and Eric – lemon bars and all – were hilarious. Vintage Pam. I also enjoyed the twist – she was really just happy Eric wasn’t with Donna.

Queen for a day.
I feel like this whole thing with Rick and Maya would have been so much better if it hadn’t come so completely out of left field (and if Rick hadn’t been so melodramatic after his true identity came out, ahem). It’s amazing that while Liam and his women take eons upon repetitive eons to do anything, other characters change relationships, and even personalities, at the speed of light! Yep, Maya has my vote over the newly neurotic and vain Caroline – the Rick/Maya relationship has the same sort of appeal that Rick and Amber had. It was also interesting (and completely transparent) that Carter told Marcus he was intrigued by Maya – triangle alert!

The Bold And The Beautiful Spoiler Video: Available

The Bold And The Beautiful Saturday Teaser Poll: Caught