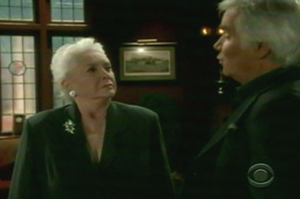 The next supercouple? (Soaps.com)

B&B Breakdown for the week of December 29.

I hope everyone had a wonderful and safe New Year’s! B&B was pretty good this week, offering glimpses of an interesting 2009, so let’s get right down to it!

Out With the Old
We’re getting past the grieving over Phoebe and moving into the New Year with compelling stories for everyone involved. Of course the pain of Phoebe’s death is sticking with everyone and shaping the decisions and actions of those close to her. After no follow up on certain storylines in the past, B&B is using Phoebe’s death as a springboard for new ones. So we will see how the tragic event affects Rick, Ridge and Steffy’s future actions. And by bringing Pam back, Donna gets a new dilemma in the form of her tormentor that may affect her newly returned happiness with Eric. One of the best things soap operas can do is to end one story arc by beginning a new one for the characters involved and B&B did this extremely well in my opinion.

2009 also looks like it will bring good things for Bridget, Owen, Katie and Nick; people we haven’t seen much of in awhile. For more on that, check out our Spoilers page.

No Remorse
I was appalled at Eric this week. The gall of him to turn his dumping Stephanie around on her! He didn’t ever say I’m sorry or indicate that he felt bad about leading her on only to throw her to the side once again for Donna. This break up was not her fault at all and he dredged up their past like she was the one to betray him. Since his coma, Stephanie has been by his side loving and supporting him and he thanked her by throwing Donna’s love for him in her face. I really thought she meant it, when she told him she was done with him, but then New Year’s Eve rolled around. More on that later though.

Even though I thought Stephanie should have been angrier with Eric afterwards, I liked the scene where they told their family they were separating again. It was funny and sweet as they finished each other’s sentences and Stephanie made Eric his coffee just the way he likes it. It would be so great if they could remain friends and engage in honest, yet snide banter. The other great part about that scene was that Stephanie finally told Felicia not to worry about her parents, but to focus on her own love life. It’s about time! Now Felicia just needs to get one.

Guilt Looks Good on Him
While I’m disgusted with Eric, I’m liking Rick more and more. I can feel his pain over Phoebe and believe he wants to do whatever he can to help Ridge heal. Ridge and Brooke confronting Rick was also fantastic. Ridge expressed his outrage at Rick in a dignified manner, while Rick took it like a man and agreed to do whatever Ridge wanted. Of course his face also revealed (to the viewers at least) his guilt over having just made out with Ridge’s other daughter whom Ridge doesn’t want Rick anywhere near. Great stuff.

Speaking of, Rick and Steffy are just hot. I know a lot of you think it’s gross and in the real world it is, but this is tiny L.A. we’re talking about! There are only so many available people in that small city you know, so lovers must be recycled and kept in the family. While it’s not acceptable in our daily lives, it’s okay in the soap bubble, so I’m all for it, because these two have great chemistry and Steffy is bringing out something in Rick that I’m really responding to.

First, why would Stephanie want to participate in her and Eric’s New Year’s Eve tradition when he just dumped her for Donna? Didn’t she just tell him she was done with him and for him not to come back to her? Her showing up with a bottle of champagne looking for a trip down memory lane kind of undermines her bold stance. And Eric’s same toast to Donna that he used on Stephanie was lame.

Second, Rick and Steffy flirting that night felt out of place to me. They were acting like any normal burgeoning couple, not two people who are grieving the loss of a sister/ex-girlfriend and who shouldn’t be together in a romantic way at all. When Rick said he couldn’t wait for 2008 to be over it was like he had a bad year because of the economy or something. There should have been more angst in that scene instead of all flirtation. It’s too soon for that.

The Showstopper
I’m not sure why the bikini is so fabulous, but I did enjoy the fashion show. It was edited to be fast paced and touched on many of the other storyline elements: Stephanie and Eric’s breakup; Pam and Donna’s feud; Steffy and Rick’s longing for each other; Katie and Nick’s engagement; and Ridge and Brooke’s wedding. I would however have liked them to show Ridge get a little ruffled upon seeing Rick on stage; Taylor making a comment about why she was there while still in deep grief over Phoebe, like ‘life has to go on’, or something; and an awkward/guilty interaction between Steffy and Marcus. I’m probably just nit picking, because I did enjoy Friday’s episode, but adding just a couple of comments or looks would have added more depth and furthered other stories along.

One other note on the fashion show: Why was Rick congratulated on the success of the show when the only time we saw him work on it was on New Year’s Eve? The whole time he’s been in charge of FC, he’s been planning Ridge’s downfall or grieving for Phoebe, so why the kudos?

Looking To the Future
If this week is any indication, 2009 should be an interesting year. I’m optimistic and looking forward to some good stuff to come out of Phoebe’s death and Pam’s return. How about you? I love your feedback so feel free to agree or disagree with me below!