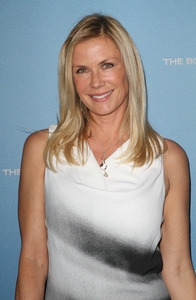 In “The Bold And The Beautiful” history, 2001, Brooke Forrester fell from the Eiffel Tower after being called to Paris under a false pretense…

A few people may be concerned about Rick’s behavior this week, but twelve years ago Ridge Forrester was concerned for Brooke’s life. The events leading up to a major fall began when Brooke started seeing Thorne Forrester. Stephanie was livid and physically attacked Brooke for sampling yet another Forrester man before suffering a stroke. Thorne didn’t want his mother to suffer another one and remarried his ex Macy Alexander to prevent it from happening.

Thorne couldn’t forget about Brooke, and Macy knew it. As Macy fell into the bottle again, Brooke pressured her say goodbye to her marriage to Thorne. Macy began to drive off, but Brooke jumped into her car. Macy wanted to scare Brooke with her erratic driving and ended up hitting a tanker. Thorne came on the scene, saved Brooke but couldn’t save Macy. At the funeral, Macy’s family revealed Thorne and Brooke’s relationship, which caused Stephanie to suffer a second stroke.

Brooke got her wish and married Thorne. However, Ridge was never far behind and got Brooke to admit she still loved him. Unfortunately for him, Thorne overheard her. Thorne quickly annulled their marriage, which put Brooke back in Ridge’s life. Massimo Marone wanted Brooke out of Ridge’s life and gave her father Stephen Logan five millions dollars to fake a sickness, so Brooke would move to Paris. While there, Brooke fell from the Eiffel Tower and Ridge came to her aid. Brooke soon found out about Massimo and her father’s deal and left Paris to be with Ridge.

View our Flashback in Y&R History: Jack And Phyllis, The Beginning and read Soaps.com’s Pretty Little Liars Spoilers to find out who Emily wants to prove wrong in tonight’s 8:00 PM episode.

The Bold And The Beautiful Spoiler Video: Caroline's Rant

The Bold And The Beautiful Spoiler Video: With Me