Power play.
Wow, there was a lot of face-stroking going on in Brooke's cabin! Bill is playing with fire - big time. That was an interesting twist to have Bill push Brooke to make a play for power at Forrester because it could raise questions about whether he's using her to some extent because she's attracted to him.

Tattoo you.
How cute was Oliver having a 'hope' tattoo? He's adorable, and deserves someone who is truly into him, so if Hope decides to go there again it had better not be just to use him as a distraction.

A new Forrester matriarch.
Oh my! Eric completely lost the run of himself after seeing Taylor in that lingerie - he professed his love and declared her to be the new Forrester matriarch! Brooke showing up and going crazy was amazing - such a showdown! Brooke's never mentioned having any plans where Eric's concerned, but they sure took root quickly when she spotted Taylor in that bedroom. These scenes were awesome, not least of all because Eric finally asserted himself. Obviously he'd had his intimacy ruined one too many times - Brooke interrupting was the last straw! Sheer entertainment - can't wait for more. How do you feel about Eric declaring Taylor to be the next Forrester matriarch? Let Soaps.com know by voting in our B&B New Matriarch poll.

Find out who Santana thinks is a drug dealer in our Glee recap: Girls (And Boys) On Film. 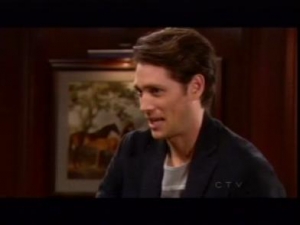 This week was pretty good on “B&B.” Things seemed to move along at a good clip and there were several storylines and a variety of characters to be seen.

Hard-boiled egg.
Rick’s sudden interest in Maya came out-of-the-blue, but is also kind of cute and definitely intriguing. So much for the big campaign/war he waged to win over Caroline – yesterday’s news so soon? Lord knows Brooke would hate a Rick/Maya hook-up if it happens, so there would be manipulations and machinations to look forward to for sure. Perhaps she’ll team up with Caroline? Also, Maya may be a little embarrassed to discover she’s been deceived – Rick’s a CEO not a waiter as he’s let her believe. In last week’s poll, the majority of Soaps.com readers loved the idea of Rick and Maya together – some because it would bug Brooke – but still…

Decision 2013.
Well folks, Liam appears to have made a decision that could have some staying power – please let it be so. I like the vibe Steffy and Liam share as expectant parents – still watchable even without the back and forth drama.

New generation.
Loved Bill riding into the house on a dirt bike with balloons and gifts! There’s no ray of sunshine brighter than Dollar Bill when things go his way! It’s fun to see that side of him.

The Bold And The Beautiful Spoiler Video: Butterflies

The Bold And The Beautiful Saturday Teaser Poll: Stunned