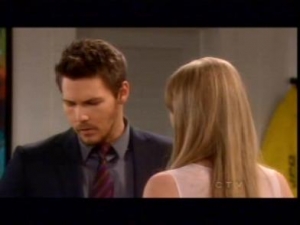 It was mostly a triangle-oriented week, which peaked with Liam learning of Steffy’s pregnancy. Eric mooned over Taylor, and Rick had to deal with a changed Caroline. Thoughts on the week:

Ambush.
If Brooke was so keen on Liam being free of manipulations to make his decision – and so sure he’d choose Hope – why did she feel the immediate need to manipulate him into a re-enactment of the ceremony in Italy? I guess when she manipulates it’s a sweet and thoughtful surprise. Too funny! Between Father Fontana spouting his rhetoric and Brooke urging Liam to put the ring on Hope’s finger it got pretty intense – I thought Liam’s head was going to explode!

I’m pregnant.
This week’s events with the triangle got me to thinking that essentially Hope and Steffy switched tactics throughout the course of things – Hope gave up on doing everything by the book, and Steffy started doing everything by the book. It didn’t make much difference because Liam still didn’t seem to know, or be able to declare, what or who he really wanted. Now that Steffy has revealed the pregnancy, here’s hoping he still chooses the person he had already decided on, despite the speeches from both sides – otherwise the questioning of his motives will be ongoing and headache-inducing.

Sushi on the shore.
Something's 'fishy' about Caroline's suddenly diva-like behavior at Dayzee's. Is this the same angelic goody two-shoes who arrived in town and was admired for having established her own cancer foundation? Sure people change, but it's extremely tough to buy someone having a personality transplant with no explanation. Dumb. As for Rick, it's not so bad that he had to deal with Caroline's whining - gave him a taste of what he's been dishing Eric's way. In any case, the minute Caroline left the cafe, Rick randomly fell for Maya because she sang a song. Yep, he got that same starry-eyed look that Thomas gets when he's about to start obsessing over someone new. Gah. What do you think about a possible Rick/Maya pairing? Let Soaps.com know by voting in our B&B Rick And Maya poll.

Get the scoop on Kelly Clarkson's feud with Clive Davis through Celebrity News.