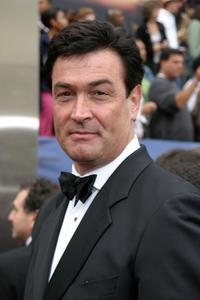 Reunited by a child.

In “The Bold And The Beautiful” history, 1990, Sally Spectra blackmailed Clarke Garrison into marriage…

Unplanned pregnancies, such as Steffy’s, aren’t anything new in Daytime. As a result of these pregnancies many male characters haven’t been too happy to get the baby news – Clarke being one of them. Years ago, Sally agreed to give Clarke half of Spectra Fashions if he agreed to marry her. Clarke was hoping Margo MacClaine would leave Bill Spencer Sr. and put Sally’s offer on hold. By the time Clarke found out that wasn’t going to happen, Sally withdrew the offer. Clarke took matters into his own hands and forced Sally into marriage after announcing their engagement publicly.

Sally made Clarke sign a pre-nup, and the two were married. Clarke, the forever gigolo, went after Julie Delorean then backed away from the affair, which infuriated Julie into giving Bill her manuscript of the tell-all book about Clarke. That wasn’t the only thing Clarke had to worry about… When Sally announced she was pregnant, Clarke ordered her to have an abortion. Sally allowed Clarke to believe she’d gone through with the procedure until Bill showed her a copy of the manuscript.

Sally immediately fired Clarke for cheating on her with Julie. However, Sally was forced to admit she was still pregnant. Clarke wanted to be a part of his child’s life and attended birthing classes with Sally, which drew them close once again. After their son CJ was born, Sally rehired Clarke as a designer at Spectra Fashions, which was once again in trouble.

View our Flashback in Y&R History: Daisy’s Arson, and read Soaps.com’s Revenge Spoilers to find out how Emily plans to get back at Victoria in the March 10 return episode.