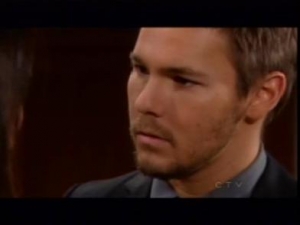 It was yet another week of waffling for Liam, and Taylor and Eric continued to get closer. Here are some thoughts on the week:

Give me your lingerie.
The idea of Taylor and Eric, her children’s grandfather, is difficult enough to get the mind around without them having super-awkward conversations. Who didn’t absolutely cringe when Taylor told Eric to give her the lingerie he designed for Stephanie and she’d wear it for him? The sentiment was lovely, but in what universe would Taylor fit into lingerie designed for Stephanie, and why on earth would Eric want to see Taylor wearing something intimate he’d designed for his recently deceased wife? Yeesh! Adding to the ridiculousness was Taylor making sex noises while working out. They write some really odd things into this show! Anyway, some are on board with Taylor and Eric, some think she may be using him, and some aren’t feeling it at all. If there were more sparks between them it might help this along. He had way more chemistry with Donna.

Home of the waffler.
It’s at the point where scenes with Hope or Steffy or Liam, or the endless flashback scenes, just produce audible groans. It’s so far beyond past time to wrap this up and let other characters have legit storylines and lives. Bell’s promised a shocking climax to the triangle, but the only thing that could still shock us with regard to this storyline is if it actually came to some kind of lasting resolution. As for Brooke planning an Italy re-do at this stage of things – just so dumb and doomed. Have we learned nothing?

The number's been disconnected.
So, I guess Marcus and Dayzee's latest storyline is coming to a close what with Maya accepting her daughter's death and not appearing to be considering legal action against Dayzee. Much like the hit-and-run previously, this story just seemed to pop up and then resolve. It will be interesting to see if Maya and Carter will stick around and how they'll fit in.

Forbidden love.
Well, it didn't take much more than a tired Katie on Valentine's Day to get Bill's mind back on Brooke. She's thinking about him too, which means this is going to happen - it's just a matter of time. What did you think of Bill's dream about Brooke coming to him in lingerie? Let Soaps.com know by voting in our B&B Bill’s fantasy poll.