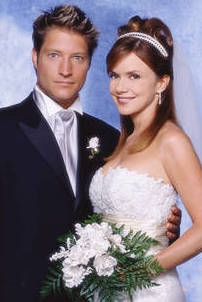 In “The Bold And The Beautiful” history, 2003, Deacon Sharpe married Macy Alexander…

What would Daytime be without spontaneous weddings? Brooke Logan may be jumping the gun by planning another one for Hope and Liam, but let’s take a look back at a marriage, which resulted from a broken heart.

Macy found out that her husband Thorne and best friend Darla had a one night stand. Though Macy thought she could raise Thorne and Darla’s baby with her husband, she couldn’t bear to be reminded of their deception and divorced Thorne.

Macy turned to Deacon, who was a recovering alcoholic like herself, and the two became fast friends. Their relationship took a romantic turn while Macy helped Deacon fight for custody of his son Eric and daughter Hope. Though Deacon didn’t win custody of Hope, he did win in the case for Eric. Macy and Deacon soon married and began raising the boy together. Just when Macy seemed to have everything she’d craved, a happy marriage and a child who she looked to as her own, things took a fatal turn.

Oscar ‘Oz’ Marone opened a new nightclub, and Macy agreed to sing for its opening night. Oz had a few enemies, ones who weren’t afraid to kill. They tampered with a chandelier, which ended up falling on Macy. Severely hurt and in a coma, Marcy’s mother Sally Spectra made the difficult choice to take her off of life support, which devastated Deacon.

View our Flashback in Y&R History: Victor’s Blackmail, and read Soaps.com’s Revenge Recap to see who suffered a loss in last Sunday’s episode.