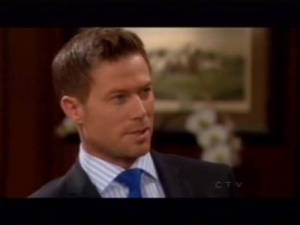 Way too much of the triangle this week. It weighs down the show. Here are some comments on the events of the past five days:

Learning from the past.
Having Brooke and Taylor reignite and rehash their past issues due to the controversy with their daughters is a little more interesting at this point, because Ridge and Stephanie aren’t around to be buffers. That said, it doesn’t make the triangle any more palatable, and it’s still a tad surprising that two grown women can’t look back on the situation and see it for what it was – they both have to concede on a few points. Brooke saying she never saw Taylor as an enemy threw me – she certainly saw her as a rival at times! Are you interested in watching Taylor and Brooke revisit their past rivalry now? Let Soaps.com know by voting in our B&B Rehash poll.

Romance?
“B&B” is one soap that can usually be counted on to deliver lots of love in the afternoon. Except for a few short scenes with Katie and Bill, and Marcus and Dayzee, it’s been a little lean lately!

Pick up the phone.
You almost have to laugh at each of the parents – Bill, Brooke, and Taylor – all running around town making their pitches re:the triangle, and Katie running off to tell Hope that Liam moved Steffy out. Then you could kind of cry, since it’s all been going on for so long, and no one has learned anything, and it all feels so silly and endless…

Promotion.
I wasn't surprised to see Rick confront Eric about his decision to promote Thomas - just wondered why it took so long. Honestly, it's amazing this company hasn't gone down the tubes with the amount of in-fighting and dropped lines.

Adoption papers.
So Marcus' brother is conveniently a lawyer now that Dayzee thinks she might be in trouble. I'm finding this hard to understand - if there was something wrong with the process, wouldn't she have questioned it back then? Here's hoping we get more on this storyline next week.

Don't talk about my mom!
The big Friday episode-ender was Hope shoving pregnant Steffy into a desk. There will be much debate about who is to blame if Steffy loses the baby - Steffy for getting in Hope's face, or Hope for getting physical. Why was Hope even there? Clearly she went to Steffy's office looking for a confrontation, so that's not good.