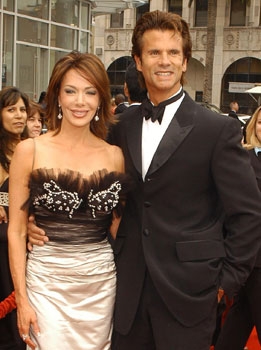 In “The Bold And The Beautiful” history, August 2006, Hector Ramirez kidnapped Taylor Forrester…

Taylor may currently be involved in other people’s business but back in the day she found herself at the center of Hector’s almost fatal attraction. Hector grew up in Los Angeles but didn’t arrive on the scene until 2004 when it was revealed that he and Ridge Forrester had been high school rivals. After Samantha Kelly got pregnant, and her mother created a plan to rid Hector and Samantha’s child from her daughter’s life, he raised Caitlin as a single father.

Hector couldn’t hold back the feelings he’d developed for Taylor, who had been married to Ridge at the time. Ridge wasn’t around for Taylor much, and Hector managed to get Taylor to agree to leave Ridge if he didn’t return home to spend New Year’s with her. Of course, Ridge disappointed Taylor once again, and she had an annulment drawn up. Hector could see Taylor still loved Ridge and enlisted her daughter Phoebe’s help by offering his services to keep Taylor out of jail through a cover-up surrounding Darla’s death.

Taylor couldn’t take the guilt any longer and confessed her part in Darla’s death to Ridge. Hector refused to watch as an unavoidable reconciliation began to unfold between Taylor and Ridge – and kidnapped Taylor. Out of his mind and obsessed with Taylor, Hector held her captive until a fire started at the house and Stephanie saved them. The turn of events left Hector without Taylor and his eyesight, which he lost during the fire.

View our Flashback in Y&R History: Lauren’s baby switched at birth, and read Soaps.com’s Dallas Spoilers to see who has to choose between a Ewing and a Barnes in next Monday’s episode.