Sword play.
What cheesy drama with Bill pretending to plunge the tiny little sword into his chest. You had to laugh, though, it's just Bill. It was a relief that Liam accepted Bill's apology afterward - no need to drag all that out - but a little weird that he put the sword necklace right back on. Of course if Liam learns he duped him, they'll have to go another round.

The triangle.
Nothing new here. It's still the same predictable stuff happening for the umpteenth time, except this time someone got pregnant instead of injured. Yup, Steffy finally came up preggers, which definitely ups the stakes. I'd predict pretty confidently that by the time Steffy makes it back home to tell Liam the news, Hope will be draped all over him. Steffy will see what's going on and decide to keep the pregnancy to herself, wanting Liam to choose her for her, not because she's carrying his child...something along this line.

Forrester Creations.
Eric is ready to pick the new president of Forrester and it looks like he may find himself in the middle of two battling women as well. Pam is guarding her territory where Donna's concerned - saw this coming! Could you see Eric with Pam, or getting back together with Donna? Vote in Soaps.com's B&B Eric’s Women poll. 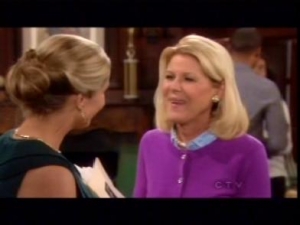 It was mostly the triangle again. Sad to see the likes of Marcus and others relegated to having ‘reminder’ conversations about stuff relating to Hope and Liam. I look forward to seeing great storylines surrounding other characters soon. It was great to be back at Forrester for the competition by week’s end.

Sabotage.
The word ‘sabotage’ became the headache-inducing repetitive word of the week, or the drinking game if that’s your thing. As mentioned above, it was frustrating to finally see Marcus, Dayzee, and Justin and realize they were on screen merely as props to the dreaded triangle drama. Hopefully they get a storyline soon – and not a short, weird story like the hit-and-run.

Intervention.
I thought Bill handled the intervention pretty neatly. He may have tried to sabotage the wedding in Italy, but it didn’t work – they got married anyway. It was Hope who wouldn’t sign the paperwork back in the States who put the kibosh on that try at matrimony. As for Hope screaming at Bill with her new aggressive attitude – it was as painful to watch as it is when she tries to be sexy – so not her. It was interesting that Brooke sort of had Bill’s back, while Katie was being more confrontational toward him. What was also surprising is that Hope didn’t seem to sustain her anger toward Brooke and the others who knew about Bill’s deception and didn’t tell her.

The Bold And The Beautiful Spoiler Video: Warned

The Bold And The Beautiful Saturday Teaser Poll: Guidance