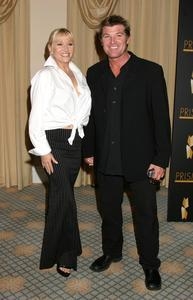 In “The Bold And The Beautiful” history, December 2006/early 2007, Thorne Forrester turned to the bottle after Darla’s death, especially when a huge secret was revealed about that tragic night…

Bill may be turning to alcohol these days to take the edge off and years ago one other Los Angeles resident did as well. Thorne was beyond devastated when news came that his wife Darla had died while trying to help Phoebe change a tire. He didn’t know how to go on without Darla and asked Taylor to help him give his daughter Alexandria the news.

Taylor was there for Thorne and they soon fell in love. Little did Thorne know Taylor had been the one who had hit and killed Darla while driving drunk. Phoebe and Stephanie had hid the truth, for fear Taylor would go to prison. It wasn’t until after Thorne proposed to Taylor when he learned the truth as well.

Taylor pled guilty after her arrest, but a witness appeared and stated that Darla had fallen into the road and straight into the path of Taylor’s car. Thorne had a change of heart and convinced Taylor to change her plea. Plans for their marriage remained, which Alexandria rebelled against after thinking Taylor had killed her mommy. Thorne and Taylor called off their wedding, and engagement, after Alexandria slashed Taylor’s wedding dress and blacked out her eyes in photos. The loss brought Darla’s death rushing back and Thorne turned to the bottle.

If you miss “PLL” tonight read Soaps.com’s Pretty Little Liars Weekly Recaps, which are posted each Tuesday after the episode airs then read Soap Opera Fan Blog’s B&B Actor Appearances to see where the stars are turning up outside of Daytime.

The Bold And The Beautiful Spoiler Video: Represent

The Bold And The Beautiful Spoiler Video: Who I Am