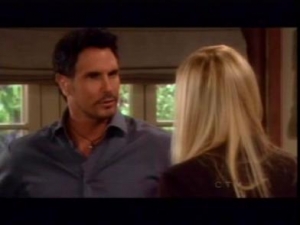 What a bummer to see the dreaded triangle storyline revisited. Worse, it immediately became a dark cloud that began to eclipse the other storylines again, with the notable exception of the too-brief Forrester Christmas, which was heartbreakingly poignant. Thoughts on the week:

Scoring points.
While Rick was busy lapping up the compliments from Caroline for coming clean to Hope, perhaps he should have told her the real reason he betrayed his sister – so he could manipulate Thomas and slither his way in between him and Caroline. Of course, Caroline’s so enamored of Rick at this point she’d probably think it was cute. Ugh.

I’ll be home for Christmas.
I loved the way Christmas was handled, from everyone gathering at the Forrester mansion, to Eric insisting on attending the Celtic Woman performance with two martini glasses, to Pam seeing the bluebird and the comic relief of Thorne tossing lemon bars against the wall, and finally to all of Eric’s loved ones showing up in his private box. I cried. So moving…and such a nice episode end to have Susan Flannery (Stephanie) appear to wish everyone a Merry Christmas. Beautiful.

Bill and Brooke.
Bill thinking about kissing Brooke right before agreeing to spend a sexy New Year's with Katie was a bit icky. Is he in love with both of them now? Brooke calling Bill over to her cabin and calling him 'Stallion' was suspect too - why couldn't she discuss Rick coming clean in front of Katie - she went right over and talked to her about it afterward! This doesn't bode well for Katie. Do you think Bill and Brooke have fallen for each other? Let us know by voting in Soaps.com's B&B Fallen poll.

Game on.
Many viewers can't stomach the idea of another round of Hope/Liam/Steffy. We're just not as invested as the powers that be are in this triangle, and many are especially peeved at the way this storyline takes front and center stage - with other storylines, if they exist at all, becoming background noise and other characters all focusing on the outcome of the triangle - so unfair and so tiring to watch day in and day out.

Get the scoop on the "American Idol" season premiere through Reality TV Rush, and watch the Revenge Spoiler Video: Emily With Victoria. Soaps.com will be posting "Revenge" recaps after each episode!