Take a look back at 2012 Best & Worst Soap Opera Characters then view Soap Opera Fan Blog's B&B Spoiler Videos in case you've missed any of the major scenes this week.

In this week’s Throwback Thursday Soaps.com takes readers back to December 2010 when Amber Moore got the idea to pass her unborn child off as Liam Spencer’s…

It’s over a year later and Liam is still stuck in a triangle involving Hope Logan. Last year at this time there was another woman – not Steffy – causing issues for Liam and Hope. Amber had realized she was pregnant and believed the baby to be Oliver Jones. Amber knew how much Oliver loved Hope, and someone else believed Amber could give Oliver Hope and give her unborn child a better life by pin-pointing Liam as the father.

At first Amber protested and didn’t want to lie about her baby’s paternity but soon someone put a plan into motion, leaving Amber with the chance to give her child a life of riches by being a Spencer. Liam hadn’t remembered sleeping with Amber but admitted to Hope that it was a possibility. Once the pregnancy was announced, both Liam and Hope were devastated to think he’d fathered Amber’s baby.

Do you remember who urged Amber to pass the baby off as Liam’s? Vote in our poll then feel free to leave any comments on this storyline below…

The Bold And The Beautiful Spoiler Video: A Spencer 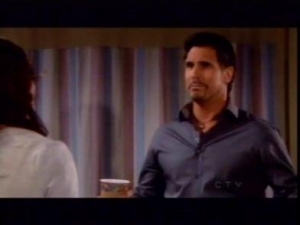