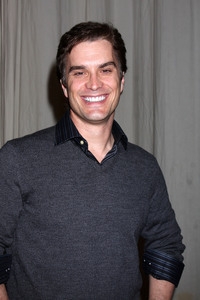 In “The Bold And The Beautiful” history, 2002, Whip Jones took it upon himself to claim Brooke Logan’s unborn child as his own…

Whip, a longtime employee of Forrester International, arrived in Los Angeles during a very hard time in Brooke’s life. She had had an affair with her son-in-law, Deacon Sharpe, and ended up pregnant. When Stephanie found out about Brooke’s secret pregnancy, she revealed the truth during a press conference to relaunch Brooke’s Bedroom line. Whip took note of Brooke’s public humiliation and claimed her unborn child as his own in front of everyone.

Brooke’s kids were confused, as they had never heard of Whip. When Whip realized who the father of Brooke’s unborn child was he blackmailed her into setting him up in the high life with a raise, new car, a house and even a yacht – all in exchange for his silence.

Not uncommon in soaps, Whip began to fall for Brooke over the course of their alliance. Brooke couldn’t reciprocate Whip’s feelings due to her longing for Deacon. Though Brooke moved to Paris, and even slept with Deacon while there, Whip convinced her to marry him as to end the caustic affair. In the end, when the truth came out about the affair and pregnancy, Whip did the right thing and had his marriage to Brooke annulled.

Feel free to leave your favorite “B&B” memories in the comments section, and if you haven’t already view our Flashback in Y&R History: Phyllis says goodbye to Daniel.

View Soaps.com’s Primetime Dish to see which star has landed a “True Blood” role then read Soap Opera Fan Blog’s B&B Actor Appearances to see where the stars are turning up outside of Daytime.

The Bold And The Beautiful Saturday Teaser Poll: Concerned

The Bold And The Beautiful Spoiler Video: A Spencer