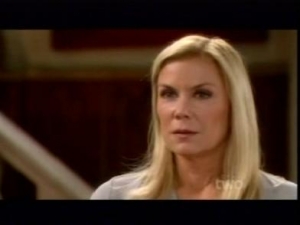 The impending return of the dreaded triangle weighed heavily this week, so “B&B” didn’t seem as enjoyable as it has been, although the Taylor/Brooke/Katie/Bill scenario brought plenty of drama. Some thoughts:

The big confession.
Nothing surrounding Rick’s confession really makes sense – it’s just an excuse to kick us back into dreaded triangle mode. Why does Caroline suddenly have this great respect and concern for Hope? The last time I recall them interacting, Hope was chastising her for trying to pit Thomas and Rick against each other. Why is Rick only telling half of the truth? His lie wasn’t just to keep Hope from reconciling with Liam, but also to propel her into Thomas’ arms so that he could move in on Caroline. It’s also rather convenient that Hope has forgotten all of the issues she had with Liam save for that one incident on that one night. Gah.

Trash-talking.
What was up with Caroline getting in Steffy’s face? Why the sudden dislike? Caroline should have been established as a solid character by now, but the girl has been all over the place as the plot dictates. There’s no explanation for why she likes or dislikes the people she does – and the person she was first sketched out to be would never have been attracted to the smarmy Rick. She’s a confusing character.

We never have to talk about this again.
Dear Katie, you are on “The Bold and the Beautiful.” The kiss between Brooke and Bill will be talked about again. Repeatedly. You are fooling yourself. Katie may believe they’ve all put the kiss behind them, but she isn’t going to forget about it, Bill said he’ll never forget it, and if Brooke can’t put it out of her mind, it’s game over. The writing is on the wall, I just wonder what it is going to take to upset the apple cart and make Brooke and Bill go there again.

Confidentiality?
So, if someone guesses the truth about your patient you're allowed to roll with it? I couldn't believe Taylor discussed Katie, Bill, and Brooke with Steffy, though I found it interesting that Steffy defended Brooke. It was also compelling to see Brooke and Taylor get on common ground briefly while talking about Stephanie - it was a bit of a moment. On the whole, Taylor needs to rein in her personal impulses when practicing as a therapist.

Surprise!
Well, Liam came home early to surprise a very happy Steffy and they enjoyed a carefree and passionate reunion. This could only be the precursor to the return of the dreaded triangle. Hope called and obviously very confident that Liam would dump Steffy instantly and take her back, ran into his arms and kissed him. What do you think Liam should do? Let us know by voting in Soaps.com's B&B Liam’s Reaction poll.

Find out who "The X Factor's" Simon Cowell was gushing about through Celebrity News, and watch the Revenge Spoiler Video: We Know What You Want. Soaps.com will post "Revenge" recaps after each episode!