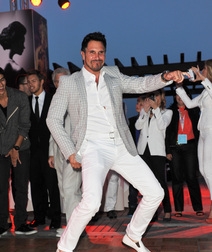 Christmas has passed but New Year’s Eve and the beginning of 2013 is right around the corner. If it were possible would you like to dance with one of the Spencers, have a cocktail with a Forrester, or maybe sing karaoke with a Logan?

For fun, if you could spend New Year’s Eve with any one of the current “B&B” families who would it be? Please vote in Soaps.com’s poll then feel free to elaborate on your answer in our comments section.

If you haven't already vote in our Y&R Poll: Which Noah Do You Prefer?

Whether it's in "B&B's" Los Angeles, or some other fictional soap city, where would you spend two weeks over the holidays? Vote in our Weekly Soap Debate: Holidays and get prepared for the January 8 "PLL" return with Pretty Little Liars Recaps and Spoilers.