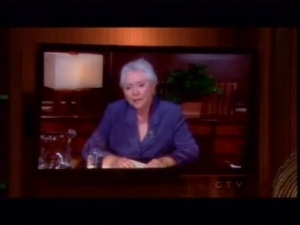 There was plenty going on this week on “B&B,” and thankfully, Liam stayed out of town meaning we only had to submit to a few scenes regarding the dreaded triangle. Here are some thoughts on the week:

Back to basics.
While Stephanie’s announcement from beyond the grave was a cool twist, and a relief given how arrogant Thomas was behaving, it created a lot of questions. Why doesn’t Eric just run the company himself? If this is supposed to bring the whole family together, why does the competition divide them into rival units? Why not force the ones who can’t get along to work together? What happens to Ridge when he returns? Why isn’t Thorne the next in line to the throne, or at least a part of the competition? Super-frustrating stuff if you’re a fan of logic. If it were up to me, I’d be telling both Rick and Thomas that they’re way too cocky and immature to be taken seriously. If it does come down to them, they have different strengths and should probably share the responsibility, though the daily bickering would be unbearable to watch. Two good things have come out of this storyline – more Eric, and an upcoming fashion show.

Reckless.
Caroline’s ‘Spencer senses’ are obviously a little off or they might have ‘tingled’ while she was unloading ‘the truth’ on Bill instead of Liam. As intrigued as I was with Caroline when she first arrived, her recent single-minded zest to meddle on behalf of truth and justice is on my last nerve. Not to mention that ditsy girly-giggle she gives Rick – cringe-y! Anyway, she’s obviously not going to rest until she’s revealed all, so Bill should probably come clean to Liam on his own.

Heads-up.
Also acting sort of 'reckless' was Taylor, who obviously doesn't subscribe to the school of 'what you don't know can't hurt you'. She could hardly wait to tell Katie about the kiss between Bill and Brooke. The issue with her actions is that she's treating a patient who has just emerged from post-partum depression and who is, presumably, very vulnerable. It just seems like Taylor may have made the decision more out of wanting revenge on Brooke, and wanting to be vindicated in her suspicions, than out of genuine concern for Katie. In fact, she may have created a crisis where one might never have arisen had she kept quiet. How do you view Taylor's decision to tell Katie? Vote in Soaps.com's B&B Taylor’s Decision poll.

Don't paint a halo on her.
While Taylor may have overstepped in telling Katie what she overheard, there's no denying that she had good reason to be worried about Brooke and Bill. Nothing more may have come of it, but there is certainly no denying the potential for trouble, especially given that Brooke and Bill have taken to rehashing their 'new closeness' on a semi-regular basis. After all, Brooke is known for being like a dog with a bone in these situations and Bill's certainly not discouraging her admiration, what with the reminders of his stallion-like status, and acting all protective and manly toward her. It will be interesting to see what will have to go down in order for the pair to justify getting together - you know it's going to happen...

Get the latest on "Dancing With The Stars" Brooke Burke-Charvet through Reality TV Rush, and watch the Revenge Behind The Scenes Video with Costume Designer Jill Ohanneson. Soaps.com will post "Revenge" recaps after each episode!