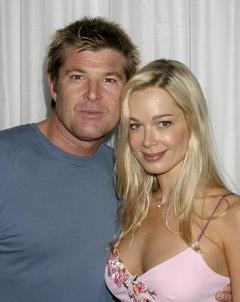 In “The Bold And The Beautiful” history, 2007, Katie Logan singlehandedly sabotaged her sister Donna’s engagement to Thorne Forrester…

These days Katie is the one getting help from others in regards to her marriage – and her sister Brooke’s involvement in it. Back in the day, Katie did a little interfering herself to make sure a good guy didn’t get hurt at the hand of her sister Donna.

Donna was witness to Jackie Marone’s fall from Stephanie’s balcony and quickly believed Stephanie had pushed the other woman. Donna rushed to Nick with her knowledge and stood by as he threatened to send Stephanie to jail if Eric Forrester didn’t turn over his family’s company to him. Donna accepted Nick’s job at Forrester Creations as the lead model and helped Jackie try to break Brooke and Ridge up – for Nick’s benefit – as well as exposing Rick and Phoebe’s relationship to Ridge.

Too busy trying to sabotage the Forresters, and in a bit of confusion, Donna had left a young Hope and RJ home alone. She’d thought Brooke had arrived home, but Child Protective Services were called in. In the end, Brooke lost the kids to Ridge with Stephanie’s help, leading Donna to plot her next bit of revenge…

Donna planned to get back at Stephanie by setting her sights on Thorne and seduced him into proposing to her. When Katie found out that Donna didn’t love Thorne, she told Thorne the truth. Katie’s interference caused Thorne to call off the wedding and sent Donna down another path of seduction – with Eric as her next target.

Feel free to leave your favorite Donna/Katie memories in the comments section, and if you haven’t already view our Flashback in Y&R History: Michael and Lauren – The Beginning.

Vote in Soaps.com’s Weekly Soap Debate: Returning Characters to see if any of your past favorites are on our list then read our Revenge Recaps from last season and look forward to new ones posted after each episode airs starting on Sunday January 6, 2013.