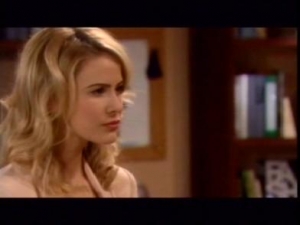 “The Bold and the Beautiful” continues to bring us a variety of characters, but it’s disheartening to see the dreaded triangle rearing its ugly head and everyone starting to talk about Liam and Hope again. Here are some notes on the week:

You were dreaming about him, weren’t you?
How funny was it when Hope walked in on Brooke dreaming about kissing Bill? The look on Brooke’s face was priceless when she thought Hope had figured it out. Despite Brooke’s protests that their interlude was a ‘unicorn’, we all know with Brooke there’s a fine line between daydreams and destiny. Best line of the week: Bill saying that no woman who has seen him naked can’t completely hate him. So good.

Does this conversation feel dangerous?
Just stop, Hope. I’m non-violent, but seriously wanted to smack Hope upside the head, and then Liam, during their inane talk about why they didn’t work out. It wasn’t because of Deacon, or because Liam may or may not have made out with Steffy at an inappropriate time. They didn’t work out because Liam constantly flip-flopped and found himself irresistibly drawn to spending time with Steffy time and time again. Not to mention he turned to her within mere minutes every time something went sideways with Hope. Let’s talk about the big picture, folks!

The Truth.
I'm torn about Caroline. On one hand, her passion for revealing everyone else's secrets and lies has become quite annoying. On the other hand, you have to admire her willingness to stand up to Bill and take him on. Ultimately, I think she's taking it all a bit personally and it makes her seem a little unbalanced. Speaking of which, what was up with her weird laughter while lying in bed with Rick after sex? In any case, it will be interesting to see who she blurted out the truth to in the Spencer office - probably it was Bill. Any guesses?

Loophole.
I think Forrester Creations is in a lose/lose situation. Whether Stephanie's loophole opens the door for Rick to takeover, or Thomas remains in charge, the new CEO will be obnoxious and arrogant. I also don't buy this whole bit with Ridge wanting nothing to do with Forrester. Recast the role! What do you think they should do about Ridge? Let us know by voting in Soaps.com's B&B Ridge poll.

Find out which family member from "Honey Boo Boo" was arrested through Reality TV Rush, and weigh in on Katie's return home on "B&B" by voting in the soap opera polls on Soap Opera Fan Blog.