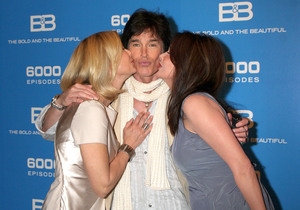 Brooke stops a wedding on horseback.

In this time in “The Bold And The Beautiful” history, 2009, Brooke appeared on horseback and stopped Ridge and Taylor’s wedding…

Nothing’s changed over the years, and Brooke and Taylor continue to find the other poking around in their business. Brooke is currently trying to keep her and Bill’s kiss a secret, but a few years ago she refused to let others keep her in the dark.

Ridge and Brooke staged their fifth wedding, like their first, in a romantic setting on the beach. Though they had plenty to argue about over the years, when it came to their families, the relationship between Steffy and Rick had them battling back then. Brooke had been unaware that Rick had only seduced Steffy to get back at Ridge for his constant back and forth between Brooke and Taylor and blamed Ridge for his unstable childhood. Once Ridge realized what Rick had been up to he ended Rick and Steffy’s relationship.

It wasn’t until Ridge and Brooke realized there had been an error on their marriage certificate when he found himself back in Taylor’s arms. Wanting to help Ridge deal with his invalid marriage to Brooke, Taylor gave him some anti-anxiety pills, which Ridge abused by taking too many. Taylor had no idea Ridge was under the influence, and they made love.

The two grew close again, and Steffy and Thomas were set on keeping Brooke out of the picture. The siblings made sure Ridge never received Brooke’s text messages and sent fake ones in reply to hers – all to make sure their parents’ wedding took place uninterrupted. When Brooke found out what had been going on she galloped along the beach on horseback and stopped the wedding just in time. Ridge was forced to admit his love for both women and urged them to resolve their issues before he picked either of them.

Feel free to leave us your favorite Brooke/Ridge/Taylor moment below. Also view our Genoa City Flashback in Y&R History: Sharon’s Past.

Vote in Soaps.com’s Weekly Soap Debate: Damsels In Distress then check out Soap Opera Fan Blog’s B&B Actor Appearances to see what the stars are doing outside of Daytime.