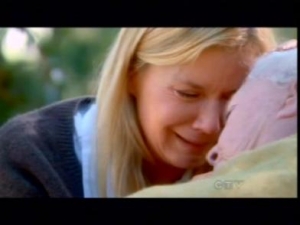 Despite a few nit-picky items, it was another solid week on “B&B.” Here are some thoughts on the happenings:

Sing me to sleep, baby girl.
Whether you love, or love to hate, Brooke, she came through for Stephanie in the end. She was soft-spoken, nurturing, and just strong enough to lean on. I was tearful as Brooke tried to keep singing through the moment she realized Stephanie was gone.

Forrester foul-up.
It was totally bizarre-o for Thomas to have called an important business meeting while his grandmother was dying, but Eric lingering around the place afterward to watch video footage instead of rushing back to Stephanie’s side took the cake.

Big Bear theory.
There were some very touching scenes at the cabin following Stephanie’s death – Brooke dazed with grief, Eric comforting Pam, Eric and the martini – but I kept wondering when we were really going to see Eric break down. As for Bill and Brooke kissing, as much as I’d been feeling their chemistry, that wasn’t the time I wanted to see them finally give in.

Our Little Family.
It was very unrealistic how Katie went from the darkest dregs of depression to happy-go-lucky following her panic attack. So it was no surprise that Bill and Brooke looked shocked to walk through the door and see her lipsticked and laughing with Will in her arms - it was touch-and-go for a few minutes. As much as they love Katie, they had just experienced the first stirrings of passion for each other as well, so the air was thick with all sorts of emotions, which both Katie and Taylor picked up on. Soapy good.

Team Spencer.
I found it a little weird for Bill to jump right into having a party for Katie. Again, it was unreal for Katie to suddenly be fine and up for all of this.

Taylor's tips.
I thought it was funny how Taylor stopped by Brooke's house and wound up giving her tips on learning to be alone - since she gained so much experience every time Brooke took Ridge away. Too much! In any case, things deteriorated after Bill's name came up. Brooke ended up reliving her bonding moments with Bill, who came to the door and kissed her. Or did he? Could she have dozed off and been dreaming it?

History repeating.
Hope seemed to be grieving Stephanie with the others at Forrester, but it turned out she was mostly shedding tears about Liam. After rehashing the now skewed memory of how it all went bad with Dayzee, Hope later found herself over at Bill's reliving Italy with Liam himself. In the meantime, Caroline had found out what 'Bill did in Italy', and is hell bent on using it to upset the apple cart. Doh! Dear Caroline, if you blab and cause the return of the dreaded triangle you may never be forgiven. Nothing has changed really - Hope still looks and acts like a twelve year-old who isn't ready for an adult relationship. I've no idea why we have to keep revisiting this nonsense. Do you want to see the Steffy/Liam/Hope triangle again, or do you think Hope should move on? Vote in Soaps.com's B&B Triangle Revival poll.

Get the scoop on "Freakshow" through Reality TV Rush, and watch the Revenge Weekly Spoiler Video: Revelations on Soap Opera Fan Blog.