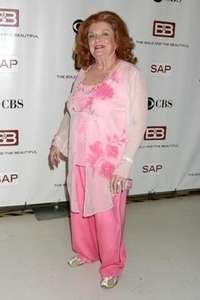 In “The Bold And The Beautiful” history, 2005/2006, Sally Spectra lost Spectra Couture after putting all her faith in Thomas Forrester…

Many are currently fearful of where Thomas is leading Forrester Creations. A few years back, fresh out of Ledgemont College, Thomas took on a job at Spectra Couture, previously known as Spectra Fashions, which led to Sally losing her company.

Always fighting against rival Forrester Creations, Sally hired Thomas as a designer when Forrester refused him an internship. She had one last chance to save Spectra and put everything she had into Thomas winning a design-off against Forrester. He lost the competition, and Sally lost Spectra for good. Darla and Thorne were there for Sally, who ended up sick and wheelchair bound. Knowing she wanted to be involved in the fashion world again, they refused to let her slip off to a retirement home and hired Sally to take Megan’s old job as Forrester’s receptionist.

Sally’s time at Forrester brought her closer to her frenemy, Stephanie Forrester, who she’d finally buried the hatchet with – after years of trying to ruin fashion shows and stealing Forrester designs. In the end, Sally moved to the South of France, and sadly her portrayer, Darlene Conley, passed away on January 14, 2007.

Feel free to leave your favorite fashion house fiasco memories in the comments section, and if you haven’t already view our Flashback in Y&R History: Alex Targets Lily.

Vote in Soaps.com’s Weekly Soap Debate: Super-Couples on which soap has the most memorable ones then read Soap Opera Fan Blog’s B&B Actor Appearances to see where the stars are turning up outside of Daytime.