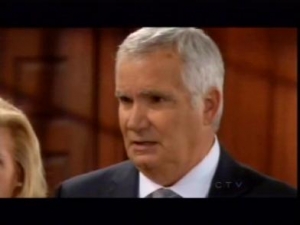 Together at the end. (CBS)

It was another solid three days on “B&B.” A few comments on the episodes:

Put your towel on, Stallion.
This scene captured the essence of why a Brooke/Bill pairing is so appealing. They’re on the same level in that ‘takes one to know one’ sort of way, and both have a similar mischievous glint in their eye. Sexy and fun.

Called away.
So it wasn’t Thomas who called Eric away from Stephanie as some speculated, but his whiny son, Rick. Of course Thomas played a role by calling the important meeting which caused Rick’s panic. If Rick was really CEO material, wouldn’t he be able to convince the board to vote against Thomas’ vision without Eric’s help? In any case, I was glad to see Eric put his foot down with Thomas, who is getting a bit too big for his britches. I also felt for Pam, wanting to see Stephanie. Aw, Pammy.

Boardroom business.
I like the dynamic developing around the boardroom table at Forrester – it’s interesting, if a little predictable, to see who sides with whom. As always, however, I’m embarrassed for Thorne to have to answer to his young nephew when he should be helming the place. Maybe one day…

Take me!
Katie’s dramatics reached new levels this week as she shouted out for God to take her. Thankfully, Taylor got her crazy behind to the hospital, where Dr. Monotone, er, Meade, declared that there was nothing wrong with Katie’s heart. Imagine that. Hopefully this heralds the end of the wailing baby/pounding heartbeat scenes. Three cheers!

Spontaneous.
Liam and Steffy continued to live blissfully in a triangle-free world, and this week decided to move back in together, though Steffy insisted on keeping her own place. This is probably smart given Liam's track record for flip-flopping - I just hope we're not going that route again for many moons.

Together at the end.
So it will be Brooke and Stephanie together at the end after all. Brooke was very nurturing and calming - I enjoyed the scenes with her brushing Stephanie's hair and dabbing her brow with a cool cloth, even as her own sense of panic rose at seeing Stephanie coughing up blood. Scary situation. I also love that they went outside in the sunshine. What do you think of Brooke being the one to be with Stephanie at the end? Let us know by voting in Soaps.com's B&B At The End poll.

Happy Thanksgiving to our American readers! Be sure to share your thoughts on "B&B" in the comment section.

Find out who will wind up in danger on "Once Upon A Time" through Primetime TV Spoilers, and watch the Pretty Little Liars Extended Spoiler Video: Secrets, Lies, and Toby on Soap Opera Fan Blog.