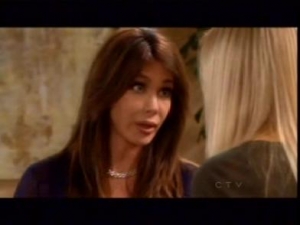 Willful Irish lass.
Stephanie’s party was pretty incredible thanks to Eric and his Irish theme, which perfectly set the tone, allowing for tears (‘Danny Boy’ really got me), and fun, with everyone dancing the Irish jig. Stephanie passed the ‘matriarch’ torch to Brooke – seems logical as Brooke behaved just like her toward Amber. When Stephanie said her goodbyes as she left the party, I was sobbing – this really wrung the emotion out of viewers. Some of the thoughts that crossed my mind during the party: Stephanie ended up being closer with Brooke and Taylor than her own daughters, I missed others Stephanie interacted with being there – such as Amber, Nick, and Jackie, and there was no acceptable explanation for Ridge not being there. None.

Big Bear.
I love the idea of Stephanie finding her peace at the cabin in Big Bear in her final days. The scenes with her and Eric are bittersweet.

An animal ready to pounce.
Okay, so maybe Taylor became a tad dramatic in her zeal to stop a Brooke/Bill hook-up, and she’s definitely biased, but she made an astute observation while arguing with Brooke – Brooke has good intentions, but once the word ‘destiny’ is uttered, people had just better accept that it’s going to happen. Omigosh, so funny. I love watching this pair go at it.

Incognito.
Okay, Katie’s just starting to become creepy what with sitting in the dark lying in wait for Taylor at her house, and lurking around for takeout in disguise. Not to mention the incessantly crying baby and heartbeat noises that follow her around. I don’t think Taylor’s really much help at this point either – the increasing intensity of her dire warnings about Brooke may land Katie back in the cardiac wing at the hospital!

Stallion.
It was bad enough that Bill managed to let Brooke know that his nickname was 'Stallion' in school, but the horse noise he made later was just cheese overkill. Later, when Brooke walked in on Bill nude and they played a horse sound it was actually hilarious. Will she 'pounce' now? Many women would!

You can't do that anymore!
While Caroline set Thomas straight on getting touchy-feely with her in one office, Hope went on to Rick about Liam making out with Steffy in the nightclub in the other office. Gah. There are no words for how annoying this has become. Not only does Rick continue to let the lie go on, but Hope continues to delude herself that the whole problem was that one single issue. None of these characters did a thing for me this week - they all seemed a bit vapid and self-centered.

The key.
Liam and Steffy continued to hold it together another week as a couple. Liam being sweetly supportive while she grieves the impending loss of her grandmother, and surprise, he asks her to move back in. Should Steffy move back in with Liam? Let us know by voting in Soaps.com's B&B Moving In poll.