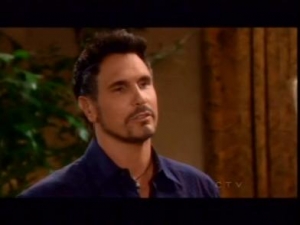 It was a pretty solid week on “The Bold and the Beautiful,” with a mix of emotion, romance, and even a few laughs. Here are some points on what happened:

Can’t a guy take a nap?
The week kicked off with some comic relief as Bill proved to be sleeping deeply as opposed to having taken an overdose, and had a glass of water thrown over him for a rude awakening. Once he recovered, it was off for the air balloon ride, which did seem like an odd thing to do while obsessing over the missing Katie, but oh well…

The babysitters club.
Liam and Steffy spent much of their time in Aspen sitting with Will. This gave them plenty of opportunity to joke around, make out, and talk about having babies of their own someday. They are really being painted as a perfectly-matched couple right now – which, unfortunately, makes me wonder what is going to go wrong and when. Here’s hoping nothing will rock the boat anytime soon – it’s been so nice watching the show without the dreaded triangle!

Have I offended you?
I got a kick out of Hope getting up in Caroline’s face about Thomas and Rick like the relationship police. She even sent the photo of Caroline and Thomas to Rick later! As for her warning to Caroline that kissing up to the CEO isn’t the way to get ahead there – really? I don’t think it would be the first time that’s happened at Forrester…

The one for me.
Caroline told Rick she loves him? What? As much as I'd like to 'feel' this pairing, it's happened too quickly. Also, Rick would be more appealing if he wasn't such a whiner. This week he whined to both Caroline and Eric about Thomas and it was a turn off.

Got my number.
Katie and her heartbeat/crying baby sounds have crossed over into the super-annoying territory previously inhabited by the Pose song and Steffy's wedding bells. Gah! That said, the depiction of her condition continues to be well done through her conversations with Taylor, who by the way, seems stronger than ever. Like!

Your husband needs his ass kicked.
Bill can be so sexy, who would blame Brooke if she wound up falling for him? Is the idea of this pairing growing on you? Let us know by voting in Soaps.com's B&B Brooke and Bill poll.

Party time.
It was amazing to see Kristen and Felicia, who is one of my all-time faves and should stick around, arrive at Stephanie's party. Love the way Eric is taking charge and planning to surprise her! I wonder if Ridge really will show up and what, ahem, form he'll take. In any case, it's bound to be a fun but emotional time next week as the party gets underway...

Find out what the popular new show "Duck Dynasty" is all about through Reality TV Rush, and watch the Revenge weekly spoiler video on Soap Opera Fan Blog.