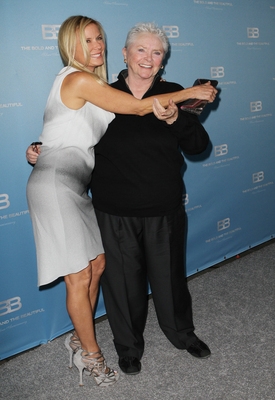 Many times during the history of “The Bold And The Beautiful” various characters have visited the Forrester’s Big Bear cabin. This week will have Stephanie and Eric Forrester visiting the special place one last time, but there were other memorable occasions for her before this. Let’s look back at a few…

In 1999 Stephanie almost took Brooke Logan out for good when she found out about her involvement with Thorne – after having had Eric and Ridge. While at Big Bear Stephanie punched, choked and threatened to stab Brooke with a fire poker – all before almost strangling the other woman.

There were happier times between Stephanie and Brooke at Big Bear a few years later. Though Stephanie couldn’t believe that Brooke had slept with her daughter’s husband, Deacon Sharpe, she tried to help Brooke make a new start. On July 2, 2002 Stephanie helped deliver Hope at the cabin.

Things turned back to normal in 2007 when Stephanie again tried choking Brooke at Big Bear – this time with a phone cord – in order to stop her from calling the police. Brooke had found out that Stephanie had framed Nick Marone for Shane McGrath’s death. Even though Stephanie held Brooke at gunpoint for a bit, she finally fessed up to authorities.

On June 16, 2010 Stephanie kidnapped her own sister Pam and dragged her to Big Bear in an attempt to keep her from Stephen Logan. Pam managed to call Stephen who appeared soon after with a gun and tried to get Pam to shoot Stephanie. In the end, Pam handed the gun over to Stephanie, who shot Stephen in the shoulder.

Speaking of Pam, she had a pretty funny Big Bear moment – literally – when she tried to feed Donna Logan to a bear in 2008! Pam wanted to get rid of Donna so Eric would go back to Stephanie and lured her to the cabin. She aimed a gun at Donna, poured honey all over her – Honey Bear style – then let a bear in the cabin. Owen Knight ended up saving Donna from that nightmare.

Since there were so many more Big Bear moments, feel free to leave your favorite in the comments section, and if you haven’t already view our Flashback in Y&R History: Kidnapped by Phyllis.

View Soaps.com’s After The Soap Finales: Where Are They Now to hear about how former “OLTL” actors managed during Hurricane Sandy then vote in Soap Opera Fan Blog’s B&B Polls, including one on Eric’s future without Stephanie.