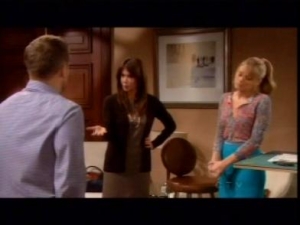 “B&B” continues to be a more well-rounded show – the change to focus on several storylines instead of just one has been a breath of fresh air!

Run to the hills.
Wow, it’s hard to get one’s mind around Katie’s delusional thinking, but it’s certainly making for some intense scenes. The rundown apartment with the morphing paintings made it clear that Katie’s really tripping! I’m wondering what on earth she’ll do next.

About that night…
Hope’s focus has shriveled to Liam lying about ‘that night’ with Steffy at the nightclub. Rick began to tell her the truth on Monday, but by Friday still hadn’t got around to it. In the meantime, Liam stumbled on to Hope at Forrester and she was about to do some flirting until she remembered he was actually there looking for Steffy. Please, Hope, do us all a favor and go back to dating Oliver – we all want to see more of him and it might even make you seem less annoying. Maybe. Thanks.

Hawaiian, er, Aspen vacation.
Brooke and Bill moved quickly to follow Katie, only to find she’d led them on a wild goose chase. I love how Bill took the time to insult Liam’s Hawaiian shirt at the height of the crisis. Too funny. Steffy and Liam’s romance in Aspen has been light and fun to watch – interesting to see Liam noticing what qualities she brings out in him too. As for Brooke finding Bill appearing to have overdosed – I don’t believe it. That’s not in Bill’s character at all.

Alive in his heart.
Stephanie and Eric's scenes had me choked up this week, as did the scenes with Dayzee. Eric was right about the house - it will never be quite as alive again when she's gone.

Forrester drama.
It's been great to see more of Taylor, Marcus, Thorne, and Oliver around Forrester. This week, Thomas made his announcement about his new vision - which sounded alright to me, although Forrester needs to retain some of that fusty old wood paneling charm as a nod to their legacy and couture line. That said, it was highly entertaining to see Rick grow increasingly disgruntled as he learned he would be stuck on the disastrous Hope For The Future line with his sister, and not even allowed to enjoy the lingerie line anymore as a consolation. Additionally, Rick learned that Caroline and Thomas would be the new power couple of Forrester Creations - outplayed at his own game I'd say! Caroline's enthusiasm for Thomas' vision certainly isn't likely to help Rick's headache. In fact, Caroline may find herself in hot water with Rick if bored Hope gets involved with her camera phone. Friday's scenes with Taylor calling out Rick and Hope were a hoot. Finally someone told Hope the truth about her tying her line (and her endless press conferences) too closely into her personal life. Wait 'til Brooke hears... Thomas may or may not be a mess as CEO, but it sure is shaking things up over there. What do you think of Thomas' vision for Forrester? Let us know by voting in Soaps.com's B&B Thomas’ Vision poll.

Find out about the Kelsey Grammer scandal involving the Playboy Mansion through Celebrity News, and vote on AJ's return to "General Hospital" through Soap Opera Fan Blog's soap opera polls.