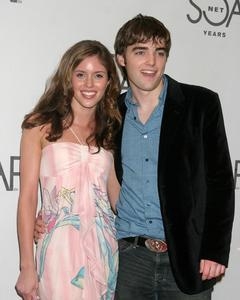 In “The Bold And The Beautiful” history, 2004/2005, before Rick and Thomas fought over Caroline Spencer there was Caitlin Ramirez…

Upon her move to Los Angeles, Caitlin Ramirez (played by Kayla Ewell) wanted to become an intern at Forrester Creations. The only problem was her father Hector hated everything Forrester because of his high school rival, Ridge. Caitlin went after her dream and kept her new job from him. She became friends with Thomas Forrester (played by Drew Tyler Bell), who she found fun to flirt with. Her time at Forrester was short lived when Hector learned the truth and forced Caitlin to quit.

Caitlin didn’t give up her love for fashion, She began interning at Logan Designs and met Samantha Kelly, who turned out to be the mother she thought had died during her birth. Her parents overcame their obstacles and reunited, making things easier for Caitlin to follow her dreams – and her relationship with Thomas. When Thomas urged his family to take a look at Caitlin’s designs, she inadvertently met Rick Forrester and was quickly taken by him.

Little did Thomas know, while he was seeing Caitlin, she was also seeing Rick. It broke Thomas’ heart when he learned the truth after spying Rick and Caitlin kissing the day of a fashion show. Caitlin tried to let Thomas down easy and began seeing Rick exclusively. Considering Rick had already been married and was much older than Caitlin her father had major issues with their relationship, which led to the couple realizing that they both wanted different things in life.

Though she went back to Thomas, he had been involved with Amber Moore and decided in the end that he and Caitlin should simply be friends. Caitlin was heartbroken and left both Thomas and Rick behind after heading to New York with her mother.

Feel free to leave your favorite Rick/Caitlin/Thomas memories in the comments section, and if you haven’t already view our Flashback in Y&R History: Katherine and Jill: The Beginning.

Good Girls Recap: Who's the Boss?