The Bold And The Beautiful’s Kim Matula Staying 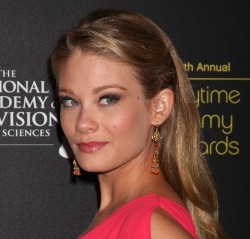 Actress Kim Matula who plays Hope Logan on “The Bold and the Beautiful,” has announced that she has signed a new contract and will be staying on in her role. She let her fans know with this Facebook post:

“Dear Everybody, Lots of rumors are going around that I am leaving the show and I want to say that these rumors aaaaare…false! I just renewed my contract and will be staying 🙂 xoxoxox”

Are you happy that Kim will continue to play Hope? Vote in the poll below to let Soaps.com know.

Relive the storyline in which Stephanie was diagnosed with lung cancer through our recent Flashback in B&B History.

Find out who will guest star on the next "The Big Bang Theory" through Primetime TV Listings, and vote on "B&B's" future after Stephanie's departure through Soap Opera Fan Blog's soap opera polls.

Mickey Guyton: 5 Things To Know ABout The ACM Awards Host

Alma Wahlberg Dies: Mother To Mark And Donnie Wahlberg Was 78