Tyrannical Thomas.
Thomas raising eyebrows by running around Forrester playing Bossy McBoss and generally acting like a rude jackass was kind of entertaining this week. That said, I'm sure we'll see that he's acting this way to cover up his insecurities. Here's hoping it all gets sorted out - I miss the sparkly-eyed Thomas. Meanwhile, Caroline isn't giving him the time of day. She's so not what she appeared to be - suddenly she's very judgy and snotty - even mean. Personality change for the sake of pushing the plot? It seems so. In any case, through Donna, we got some insight into Thomas' thoughts on Friday. Donna, notably, was behaving more like her former self - much preferable to the slapstick comedy version of Donna we've been seeing hamming it up with Pam on a regular basis (one Pam is enough!). Do you think Donna should be the one to comfort Eric after Stephanie's gone? Vote in Soaps.com's B&B comforting Eric poll.

I will always love you.
Watching Stephanie and Eric digest the news about her prognosis was heart-rending, however, the real waterworks started when Stephanie told Pam, and later, Brooke, that she's going to die. The raw emotion this storyline will evoke in "B&B" fans is a testimony to the depth of feeling and attachment they develop for the characters they have watched for so many years. Stephanie is like a mother to Pam and Brooke...and to us. Whether you loved her, or loved to hate her, it's the end of an era. Friday's scenes between Brooke and Stephanie, often referred to as the real supercouple on the show, didn't disappoint. I was shedding tears before Brooke had finished reading the invitation. I'd have liked to have seen some more heavy emotion from Eric this week, but perhaps he's in shock and that's still coming. More invitations and more tears await next week...

If you missed it last night, check out my Grey's Anatomy recap, Love The One You're With, and see a photo of ex-"Y&R" star, David Hasselhoff through Soap Opera Fan Blog's Star Gazing. 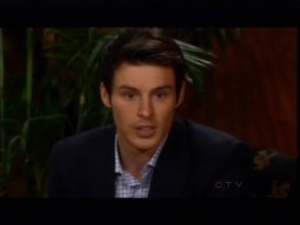 This week the storyline that may prove to be the most emotional ever on “B&B” began to play out as Stephanie started making decisions on how she would spend her final days, and began breaking the news to her loved ones. It’s going to be a tough farewell. In happier news, we only saw a glimpse of the dreaded triangle this week. Thoughts to ponder:

Baby blues.
The issue of post-partum depression is being well-addressed in Katie’s storyline, though it’s a little tedious to sit through as a viewer. Hats off to Heather Tom for tackling this emotional material while she was pregnant in real life. Awesome. The most intriguing development has been the closeness in scenes between Brooke and Bill – it seems very deliberate. Could a Brooke/Bill hook-up be in the future?

In it for the long haul.
Though we know there is no such thing as ‘the long haul’ for a couple in Daytime, it was refreshing to see Liam and Steffy simply being together this week instead of the usual angst, flashbacks, doubt, and rehashing of drama. Here’s hoping it lasts for a while, though it’s doubtful, given that Rick seems to be on the verge of outing himself. Notably, Hope now has the failure of her union with Liam down to one identifiable glitch – him making out with Steffy at the nightclub – if only that hadn’t happened, then everything would have been a go. Sigh.

The Bold And The Beautiful Spoiler Video: My Strength

The Bold And The Beautiful Saturday Teaser Poll: Declaration