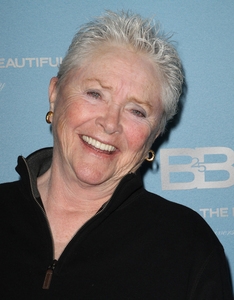 Stephanie Forrester finds out she has lung cancer.

In “The Bold And The Beautiful” history, September 24, 2010, Stephanie was diagnosed with stage 4 lung cancer…

During an argument with Brooke, Stephanie had taken a hard fall, was rushed to the hospital and was told she had lung cancer. With only Brooke by her side, Stephanie ordered her nemesis not to tell anyone in the family and refused treatment.

Her request put a lot of pressure on Brooke, who was forced to go along as Stephanie lived out her bucket list. During one of their excursions, on a rollercoaster, Stephanie was wearing her mother’s red scarf, which was whisked away by the wind. When she saw Dayzee pick it up, Stephanie followed the girl to Skid Row and became inspired by everything Dayzee was doing to help others. This led to Stephanie wanting to make a difference, as well as facing her cancer head on.

Stephanie let her family in on the news, accepted treatment for her cancer and finally made peace with Brooke, noting how much the other woman had been there for her. After Stephanie bought the Insomnia Cafe from C.J. Garrison, she named it Dayzee’s and handed it over to her new friend, who was able to provide jobs for the homeless.

Her next quest had Stephanie trying to help Nick Marone quit smoking his beloved cigars. She staged an intervention and continued to support Nick as he tried to quit. Though Stephanie and Eric hit a few bumpy patches, due to her not wanting to be intimate, she had the love of her family and the hope that after treatment her cancer would be gone for good. Sadly, on October 12, 2012 Stephanie received word that her cancer had returned.

Feel free to leave your favorite Stephanie memories in the comments section then check out our Flashback in Y&R History: Victor and Nikki: Where it all began.

View Soaps.com’s Primetime Dish to hear about how Christmas will come early on “Castle” then check out Soap Opera Fan Blog’s DOOL Fan Fiction for a few options on how Sami’s happiness pans out, depending on relationships with a few different men.